SCB Steelers’ Quick Hitters: The “Under a Week to Go” Edition

We are now under a week to go until our Steelers arrive in Latrobe and I for one, cannot wait. While Antonio Brown’s cross-country tour for Nike has been cool and Le’Veon Bell’s contract squabbles have provided plenty of material, I’m ready to talk some actual football! On the 25th, our ‘Training Camp Tidbits’ will make its’ debut. It will have everything you need to know about what is going on at camp and is sponsored by our friends at Taps N’At in Derry which is just a short drive from St. Vincent’s College. Please consider stopping by for one of many beers on tap and some excellent bar food!

A narrative coming from some national football writers I do not understand is their claim that the Steelers will regret not signing Bell to a long-term deal. This comes from a couple of things. First, these folks obviously do not understand how the Steelers do contracts. Second, the Steelers weren’t going to change how they do contracts just for Bell and third, the argument that the offense runs through Bell shows a complete lack of understanding. The Steelers have proven that when Bell is out they can still operate. Take away Ben Roethlisberger? Good luck. The reason for these articles and opinions is to create clicks. Kevin Colbert clearly made a more than fair offer to Bell. He would have been paid 70% higher than the top earning running back but Bell wanted more and that’s his right. But these ‘outsider’ narratives are way off base and hopefully you didn’t need me to tell you that.

Easily the best fit of the night!! ?? You already know @theblacktux got me right!! #ESPYS #theblacktux #ad pic.twitter.com/L0blnAKxgm

As much as I hate AB being on the cover of Madden ’19 many fans reminded me that Tom Brady was on the cover last season and did not suffer from the curse unless of course you think losing the Super Bowl was the curse….

If you own a business or just want to support the site I’m still looking for sponsors for several important pieces of content. Email me at contactscblitz@gmail.com if you’re interested.

Julio Jones, the second-best wide receiver in football, was informed by the Atlanta Falcons that his contract will not be  adjusted. This likely means that Jones will hold out of Training Camp. I could be wrong but I sense as the current collective bargaining agreement comes to an end in a few years, more guys will be doing this. I also expect the players’ union to press hard for a work stoppage.

I’m wondering what AB will show up to Camp in this year… Pretty hard to top a Rolls Royce. 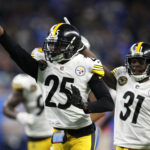