The Pittsburgh Steelers enter this weekend’s game at 3-4 and host an Indianapolis team that sits at 5-2. If you base the Steelers’ outcome of this game on their record against winning teams then this game is not looking good. The Steelers have lost to New England, Seattle, San Francisco and Baltimore. Those teams have a combined FOUR losses. The three wins the Steelers have against Cincinnati, Los Angeles (AFC) and Miami find those teams with a combined THREE wins. That’s why this week in my opinion is a litmus test. If you take out the Patriots’ loss, the Steelers’ other three losses were by a combined nine points and each of those games was winnable. Until last night in Arizona, no one had played the Niners as well as the Steelers had. This Sunday’s game therefore is a major milestone-type game. A “good” performance that still results in a loss will just be added to the others. A win however could prove the Steelers are an improving team who truly are headed in the right direction. Either way the extremes should get closer together.

Outside linebacker Anthony Chickillo has returned to the active roster. To make room, Jay Elliott has been released. While Chickillo, who had the charges against him dropped, has also been released from the Commissioner’s Exempt List. The NFL however is still investigating the incident between Chickillo and his girlfriend. I do not think Chickillo is on this team in 2020 due to this incident but moreso because he isn’t worth the money he’s being paid.

I’m not buying these reports that the Steelers tried to trade for Le’Veon Bell before Tuesday’s trade deadline. First of all, they are incredibly tight to the cap right now and that alone signifies why this wouldn’t happen. Secondly, I see no reason why you’d bring back a guy whose lack of maturity was only trumped by Antonio Brown. Bell’s body is on the decline in my opinion. He was the workhorse for Pittsburgh and quite frankly they wore his wheels right down. Bell provided many terrific highlights during his career in the Steel City but the time has passed and so too should these ideas of bringing him back.

Notes… I still have the belief that Conner won’t play on Sunday. Today will be a big factor in that decision… Good to see core special teamer Ulysees Gilbert a full participant. He missed last week with back spasms… Desir missed practice again with a hamstring injury. That could be a huge positive for the Steelers’ passing game. (report courtesy steelers.com)

Things I Expect to See Sunday

Look for more short passing this week in an effort to get the ball to a number of guys. I say this because if Conner doesn’t play, Jaylen Samuels can’t be expected the run the ball effectively and catch a ton of passes… Speaking of Samuels, don’t be surprised if you see lots of counters. Much like the Steelers did to New England last season that could be very effective against a fast Indy defense… Covering the tight ends will be of paramount importance Sunday. Mark Barron absolutely has to cover better than what we’ve seen because I guarantee you the Colts have targeted him. 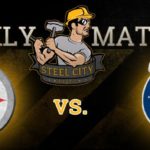