One of things I always get frustrated with at Draft time is the rush to judgment. I have no problem saying whether or not a pick by the Steelers is a “good one or bad one” but I hate seeing analysts give grades to each team’s draft. Why? Because quite often you don’t know just how good or bad a draft pick is until after three years. This isn’t to say you can’t make some assumptions about players but to outright call them great players or busts after one year just isn’t appropriate in my mind. The three year waiting period should be mandatory but that isn’t how draft analysis works. Oh well right?

We started our in-depth look at the NFL Draft last night on the Steel City Blitz Steelers Podcast presented by 26shirts.com/Pittsburgh. Ian and Cnic joined me to discuss the QBs, TEs and D-Linemen. Check it out!

One position in this draft that has been very quiet is outside linebacker. I’m already on board as saying I don’t think the Steelers should give Bud Dupree is fifth year option because I haven’t seen enough to warrant it. That in my mind, I would not be surprised AT ALL if the Steelers took an edge rusher in this draft. Despite setting a team record for sacks in 2017, not many of those came for the outside rushers.

Just got out here at Coachella! Bout to be littt!!

It looks as though the Seattle Seahawks got cold feet with Colin Kaepernick. He would not say whether or not he would still kneel or not during the National Anthem and that was enough for the Seahawks to pass on him for now. As I’ve said throughout this, regardless of whether I think Kaepernick is within his rights to kneel (and he is), the choices we all make have consequences. NFL owners are choosing not to employ him and it is their right. What irritates me however is that Vontaze Burfict has done far worse things yet remains employed. Reuben Foster is facing 11 years in prison for domestic assault among other charges yet he’s still on the 49ers. Is what it is I guess.

Speaking of Burfict, he has been suspended for the first four games of 2018 for his use of performance enhancing drugs. As Ian tweeted yesterday, we fully expect the Steelers to play the Bengals in week five and it will likely be on national TV.

Very interesting look back at the Santonio Holmes trade from Ian right here.

Have an outstanding weekend Steeler Nation! 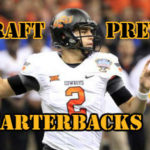