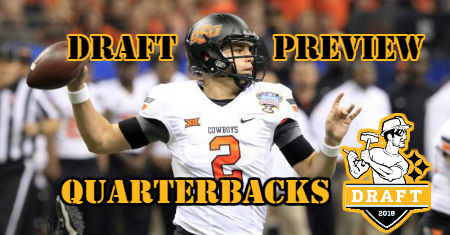 With two weeks remaining until the NFL Draft, we’ll be taking a position-by-position look at the Steelers roster and where the team has the biggest needs. Despite winning the AFC North Crown and finishing an over-ruled catch (that is now a catch) away from being the #1 seed in the AFC, the Steelers have plenty of needs to address on their current roster. While some believe the Steelers need to focus exclusively on defense in the upcoming Draft, the team has generally split their draft picks between offense and defense. The Steelers will have 7 picks in the draft with no picks in the 4th or 6th round but with 2 picks in the 5th and 7th rounds. Today’s preview will cover the quarterback position, which we also discussed recently on Episode 67 of the Steel City Blitz Podcast.

After flirting with retirement during the summer of 2018, Ben Roethlisberger returned and had a Pro Bowl season with over 4200 passing yards. After the season, Roethlisberger seemed to put the retirement talk to bed and spoke about potentially playing another 3 years. His current contract has two years remaining. Landry Jones is entering the last year of his second contract and is being paid a very good value for being a backup quarterback who has likely reached his ceiling. While Jones has received a lot of flak from the fanbase over time, he has proven to be a capable backup who knows the offense enough to get the team out of the huddle and make audible calls at the line. Josh Dobbs was, in theory, drafted last year to be the backup QB of the future. Dobbs saw a lot of playing time in the preseason and we will likely see a lot of him again this preseason as the Steelers try to get him accustomed to the offense with the plan to have him take over as the backup if Landry Jones leaves after the 2018 season.

Kevin Colbert has gone on the record as saying he would like to draft Ben Roethlisberger’s successor before Ben retires. This does not necessarily mean that the Steelers will do it this year. The team has other, bigger, needs elsewhere on the depth chart than at the Quarterback position. The three players that were on the roster last season will be there again in 2018. Drafting a QB would require either jettisoning one of the backups (Jones who is the veteran or Dobbs who was just picked last year) or carrying 4 QBs on the roster in 2018.

Potential Prospects: The hot name on the tongue of many Steelers fans right now is Oklahoma State’s Mason Rudolph (READ: SCB’s Prospect Profile of Rudolph). Many seem to believe that Rudolph is a viable option for the Steelers in the first round of the draft. Given the current depth chart, this would seem to be an elaborate smoke screen to use an early round pick on a quarterback. This could bait another team into trading ahead of the Steelers or provide the Steelers with a solid trade offer themselves if someone is looking to move up for Rudolph. He has a big arm but played in the spread offense at Oklahoma State, which has been notorious for putting up big numbers for collegiate players but not necessarily generating the most NFL-ready prospects.

It is worth noting that Kevin Colbert, Mike Tomlin, and new offensive coordinator Randy Fichtner attended Louisville’s Pro Day and there was a report of the Steelers meeting with Lamar Jackson at the draft. Like with Rudolph, the Steelers have bigger needs elsewhere but they are doing their due diligence on players that will likely be available around the time of their selection in the late first round. Jackson has outstanding athleticism but has some issues with his footwork and needs to work on throwing from a stronger base.

In the middle rounds of the draft, players like Western Kentucky’s Mike White or Memphis’ Riley Ferguson could be options if the Steelers decide to add a quarterback. Offensive coordinator Randy Fichtner served as the offensive coordinator at Memphis from 2001 to 2006 and attended their Pro Day this year. The Steelers did bring in Eastern Michigan QB Brogan Roback for a pre-draft visit. Roback is likely an undrafted free agent who could be brought in to serve as the 4th quarterback during training camp and to be a “camp arm” with an outside shot to make the practice squad. If the Steelers are going to add a collegiate quarterback before the end of April (either in the draft or UDFA), this is the scenario that makes the most sense. The team has bigger needs elsewhere for their draft selections and can bring in a UDFA to serve as a camp arm and compete for a practice squad spot this year.

[…] The 2018 NFL Draft is upon us and it is time for year-end positional rankings. This is my personal opinion on where I currently rank offensive players. These rankings are not in any way predicting where a prospect may or may not be drafted. Included in this list are profiles done for certain prospects along with a position preview for each position. Happy NFL Draft, all. Quarterback (Steelers Draft Preview) […]