SCB Steelers’ Quick Hitters: The “That Was Useless” Edition

Happy Hump Day Steelers’ Fans! Let’s get to it.

Steelers’ Head Coach Mike Tomlin held his final press conference of the year yesterday and pretty much wasted everyone’s time. Tomlin was non-commital, evasive and otherwise useless. Whether being asked about Ben Roethlisberger and Todd Haley or his in-game decisions, Tomlin gave his typical, standard answers which spelled out very little. Was I surprised by this? No and I doubt anyone else was either. I expect that once the Pro Bowl is over things will start coming out.

Speaking of Tomlin, CBS Sports reported that several minority owners have reportedly pressured Art Rooney II to fire Tomlin. While they are certainly welcome to their opinions, I don’t see ARII being bullied into that decision. This isn’t to say that Tomlin won’t be asked to do things differently and change his staff but I do not see him being fired.

Oh… He also called it a “disappointing end to an outstanding season.” Sorry. The season had plenty of exciting moments and big wins but the end result is what most of us are concerned with so “Outstanding?” Not in my book.

Well…. It wasn’t easy but we broke down the loss to the Jags last night on the Steel City Blitz Podcast presented by 26shirts.com/Pittsburgh.

Tweet of the Day… This would have been cool!

I went to Popeyes yesterday with @Chickillo56 and we sat in there with a group of fans for like 30 just talking ball.

It appears that Offensive Line Coach Mike Munchak is a top candidate for the Arizona head coach opening. His loss would be huge. There is also speculation that current “free agent” Todd Haley could join him as the team’s OC. Stay tuned.

Mike Mitchell? Hello????? Has anyone heard from him since the game ended on Sunday? You want to talk smack that’s fine but you better be able to back it up. Mitchell, who stood outside the Jags’ locker room telling them they’d know who he was after this game, was a total non-factor. 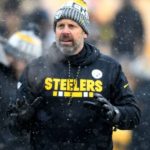