You’re seeing more and more talk about the Pittsburgh Steelers and their sudden infatuation with quarterbacks on social media. Personally, I think what Kevin Colbert and company are doing is quite normal. They are vetting quarterbacks because you just never know how the draft unfolds. However, it’s important to note that if the Steelers can make teams think that drafting a quarterback in the first or second round is possible. That’s where the ‘smoke and mirrors’ come in. If the Steelers can gain picks by trading down because someone thinks you’re going with a QB then all of the “vetting” will have been worth it.

Tony Romo was a good quarterback. That’s it. He is not a Hall of Fame player and any suggestion that he is is not well thought. Let’s just hope he is better than Phil Simms now.

I would rather lose without Joe Mixon than win with him. There, you know my thoughts on that.

Tweet of the Day… AB getting some monster arms!!

If you missed the Sunday podcast, you missed two really good points that some Steelers’ fans don’t understand. One, the type of cornerback they are looking for has changed and two, Ross Cockrell doesn’t fit what they are looking for anymore. That doesn’t mean he won’t play if he remains with the Steelers and it doesn’t mean he won’t start. It just means things are changing and sometimes it helps to hear that from other people.

I’m already tired of the “Will Big Ben be ready to go” narrative that is starting. I expect the same attitude he has always had. Otherwise, he would have retired.

Remember, if you’re doing a mock draft, you have to think like the team would, not how YOU would. Big difference.

I am off to the Great Smoky Mountains for a few days. Be good Steeler Nation! 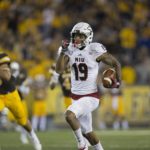