Ever get stuck on a level of a phone app that you just couldn’t get past? No matter what you did you just couldn’t fight your way through it. That’s a simple way of describing the Steelers’ recent struggles against New England. There were moments that it was just never going to happen and moments, like last year, where it was razor thin. Yesterday, the Steelers finally got to the next level. What it means going forward? I honestly don’t know but the slaying the giant sure felt good for one day didn’t it?

As of this morning, we’ve learned that Chris Boswell has deleted his social media accounts. Sadly, I’m sure they were filled with some pretty vile and nasty things following his field goal miss last night. While Boswell did in fact redeem himself, the long-term prognosis for him remains unclear.

I do not believe that Jaylen Samuels solidified himself as the Steelers primary backup running back with his huge performance. What I do believe however is that he proved he can be an excellent change of pace and secondary option in this offense. His blocking/blitz pickup still needs work but he clearly proved to me that he belongs on this roster. Terrific job by the rookie last night.

If we are going to praise the running back then we need to praise the O-Line too. some outstanding blocking especially on those toss-counters yesterday.

As I stated in my game wrap-up last night, this New England team is not like the others. From mental errors/penalties to dropped balls and poor defense, I’ll be surprised if the Pats return to the Super Bowl with this team.

Overall Ben Roethlisberger played very well. But… he cannot continue to make the same types of mistakes over and over again. The first interception was all on him as his throw sailed over JuJu Smith-Schuster. The second interception can be argued but should the ball have been thrown into such a tight window there? The defense was great last night but they aren’t good enough to overcome multiple turnovers each week.

I am of the opinion that Artie Burns is likely done in Pittsburgh. While I’m not 100% sure the blown coverage that resulted in Chris Hogan’s touchdown was all on him, he saw very little of the field after that. In fact, those three plays were it period. He needs a change of scenery or something. Very sad.

Every time I get close to saying ‘Renegade’ needs to go, they go and get it right at the perfect time.

I still think Keith Butler is gone after this season but the gameplan yesterday was solid. Good job of bracketing Gronk and creating just enough pressure to keep Brady uneasy.

Don’t be surprised if James Washington starts to get hot. He had spectacular ‘hands’ coach down the sideline and another solid catch over the middle yesterday. His confidence has to be greatly improved.

One positive about the trip to New Orleans… The Saints will be on a short week having played in Carolina this evening. It will still be a monumental task for this team but as we know all too well… Any Given Sunday, right?

T.J. Watt is up to 11 sacks now and I still think he hasn’t reached the level of play he eventually will. He may have had just the one sack yesterday but he was a persistent thorn in the side of Tom Brady.

Bud Dupree missed a lot of time yesterday and that makes me wonder how much longer he’ll be able to go with that bad pectoral muscle. My faith in Anthony Chickillo long term is not very high.

I thought both Brady and Belichick were respectful and proper in defeat yesterday. That may have been the longest I’ve ever seen Hoodie speak to an opposing head coach after a loss. 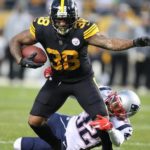