Good Monday to you Steelers’ Fans and welcome to Training Camp week!

You may not have realized this but Steelers’ first round draft pick Terrell Edmunds has yet to sign his contract. This is fairly unusual for two reasons. First, opening round selections have slotted contracts so wherever you’re selected that’s what you’ll be getting paid. Secondly, Edmunds was a late first rounder and most contractual things these days happen with guys near the top. What I can tell you is this; the fully guaranteed cash and offset language are the only things negotiable. It’s likely the hold up is due to that ‘offset language’ after the first season. Either way, the last thing Edmunds or the Steelers need is him missing even a day of Camp.

I’m really excited to announce that we have a sponsor for the next year of Quick Hitters which you are reading now (and hopefully everyday)! Frank Walker Law has generously stepped forward to sponsor this. Sponsors, especially local ones, are incredibly important to what we do here. They allow us to continue the site thru paying of site fees, subscriptions and memberships so we can keep bringing you our unique approach to the Steelers. Thanks so much Frank Walker Law!

Tweet of the Day… Probably numerous ways to take this.

How she gone eat ? pic.twitter.com/ORmImaxqXJ

There’s something that often goes unmentioned about James Harrison’s recent comments (which were not nearly as bad as you’d believe) about Mike Tomlin. The ‘something’ I speak of is the fact that Mike Tomlin brought in two guys with tremendous college coaching experience. Karl Dunbar and Tom Bradley are very good coaches but they also are used to communicating and working with young people. We at SCB believe their additions are not accidental. Tomlin has often been accused of being “too close” or “not hard enough” on younger players. Perhaps Tomlin recognized there needed to be some change there. Time will tell.

Four Questions Facing the Steelers as Camp Opens… I threw this together yesterday.

Johnny Manziel was traded to last-place Montreal in the CFL this past weekend. Do with that what you will.

Very sad to hear of Tony Sparano’s passing this weekend. He was once the head coach in Miami and was serving as the offensive line coach in Minnesota when he unexpectedly passed away. 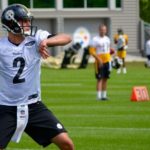