The Duck Hodges’ phenomenon is officially over. After riding the rookie to three straight wins the Buffalo Bills proved too much to overcome. Buffalo has qualified for the playoffs while the Steelers must win their final two or get help to make the postseason after their 17-10 loss. Here are my thoughts on the game.

-Duck Hodges threw four interceptions on the evening and none of them were anyone’s fault but his own. While he got little help from a horrible gameplan by Randy Fichtner which included a poor night running the ball, Hodges just made too many mistakes. Questions about whether or not Mike Tomlin goes back to Mason Rudolph are more than fair but I suspect he stays with Hodges.

-I have to believe James Conner was on a pitch count of sorts last night. After being featured on the opening drive he didn’t see the field on the next two drives and was used sporadically throughout. For the most part he looked pretty fresh and this offense desperately needs him over the final two weeks.

-Randy Fichtner is in way over his head. No, he didn’t throw four picks but he had a hand in them and he certainly had a hand in the red zone fumble from the ‘wildcat’ formation. Fichtner’s gameplan last night basically surrendered the run game to the Bills’ D. Using five-wide with Ben Roethlisberger is one thing because he knows where to go with the ball under pressure. Using it with Hodges was a huge mistake. His personnel choices, albeit limited due to injury, were questionable. No Diontae Johnson on a crucial fourth down play? The only thing saving Fichtner’s job is Big Ben and I’m not sure that will be enough for next year.

-I’ve been saying this all season but the offensive line is under-whelming this season. Way too much penetration on running plays and there were several examples of missed blitzers in pass protection as well. Is it the loss of Munchak? I don’t know but they aren’t themselves in 2019.

-Jaylen Samuels has not looked like himself since he missed those games with a knee injury. His burst just isn’t there.

-Duck missed some open receivers last night and that happens to every QB even Big Ben or Tom Brady. The problem is how often is it happening? Some times it was due to lack of time while others it was due to just simply not being patient enough. The final fourth down play was a perfect example. James Washington was breaking open over the middle and Duck never saw him.

Tweet of the Day… They sure disappeared quickly this season didn’t they?

Anyone seeing any Browns fans on here tonight??? They seem to have disappeared

-Credit the Bills’ Offensive Coordinator for his third down call to score the go-ahead touchdown in the fourth quarter. He caught Terrell Edmunds asleep and I have no doubt Edmunds never dreamed they’d throw to a backup tight end in that situation. Edmunds’ effort on the play was awful.

-T.J. Watt is unlikely to win the Defensive Player of the Year Award simply because Stephon Gilmore is a Patriot and he’ll win it (he’s a tremendous player but you know what I mean…). That said, Watt makes so many plays to affect the outcome of games that it has almost become routine. The Bills were creative with him last night often using a tight end to his side and widening their splits to get him further from the quarterback. To his credit, Watt still found ways to impact the game.

-Steven Nelson recorded his first pick of the season last night but other than that he was picked on endlessly by Buffalo. They used the speedy John Brown as more of a possession guy last night which worked well. Nelson had to play as if Brown was going to go deep and he rarely did.

-I think the Steelers will watch film today and I think they’ll be disgusted at the number of tackles that were missed in the interior on running plays. Both Frank Gore and Devin Singletary do a great job of moving forward on contact and it appeared to hurt the Steelers at times.

-A week after Baltimore blitzed Buffalo on nearly every play, Keith Butler and company chose a much more conservative approach often playing cover two and rushing just four guys. I wonder if this was done to limit Allen’s running? Sure could have used a few more blitzes at times last night.

-There will be many who criticize Mike Tomlin for this loss but you have to take a step back here. Would you rather this team had just folded and was sitting at 4-9 entering last night or would you have rather had the game we had? It’s fair to question Tomlin’s tolerance for Fichtner’s gameplan for sure but Tomlin doesn’t fumble and throw interceptions though either. Let’s wait two more weeks before we judge Tomlin this year.

-Jordan Berry picked a horrible time to have his worst night. His first half pop-up was as bad as turning the ball over there. He was under no pressure and just simply miss-hit the ball.

-The released video of the Patriots’ taping the Bengals’ sideline is damning yet I expect nothing more than a slap on the wrist. Roger Goodell’s legacy is already in question and he doesn’t want another cheating scandal to define him.

-If you think the NY Jets are just going to roll over on Sunday you’d be mistaken. They always play us tough and especially in New York, errrrrrr, New Jersey.

(Try) to Have a great day today Steeler Nation! 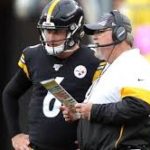