Twice a year we Steelers’ fans get to say “It’s Ravens Week” and this is one of those instances. The rivalry is the best in professional football and I’m sure there are plenty who would like to argue that. The fact of the matter is you’d be wasting your time. Since leaving Cleveland in the 1990’s, the Ravens quickly became the Steelers’ main rival and that hasn’t changed. While the Browns and Bengals are also rivals they pale in comparison to what the Steelers and Ravens have become. The faces and numbers have changed over the years but the intensity of the games has remained the same. We should expect no different on Sunday.

It’s always fascinating to me to see how Super Bowl odds can so rapidly change week to week during the course of the season. The Steelers and Colts are neck and neck in the latest Super Odds that have fluctuated again after Week 4. Two weeks ago for example you would have found Dallas and Green Bay as heavy favorites but a loss later for each how have things changed?

Okay, let's stop this one in its tracks.

The Steelers currently have $1.03M in cap space. It's not happening. https://t.co/uqwuZSyvc3

Notes… Nix is the only one who is guaranteed not to play this weekend. With the success the Browns had against the Ravens in ’12’ personnel the availability of McDonald is huge.

Steelers’ Offensive Coordinator Randy Fichtner made a significant jump in what had been a season long slump. He found a way to keep pressure off of Mason Rudolph and also figured out a way to get the running game moving. I applaud his thinking but now the real challenge comes. The Ravens’ defense is better coached, is faster and is better overall than was the Bengals. That doesn’t mean this is a great Baltimore defense because it’s not but is still better than what the Steelers saw Monday night. The Steelers have to prove they can run the ball by using more than pop passes and jet motion. Mason Rudolph has to be given more leeway to throw the ball downfield too. Can Fichtner come up with something as successful as he did last week? We will find out.

SCB Steelers Quick Hitters: The “Just What We Needed” Edition 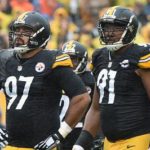 Grading the Steelers Through Quarter One of the 2019 Season