In an effort to make it as “G rated” as possible, Steelers’ QB Ben Roethlisberger described his own current style of play as “poo” yesterday. While that term makes sense I’m glad that I have the soap box from which to stand here and say, “That’s not quite strong enough Ben.” There are other words for the term ‘poo’ that are much more appropriate. Those could also be used to describe the offensive coordinator Randy Fichtner and the offensive line. But I digress… I do not read Big Ben’s comments yesterday as ‘woe is me’ as we’ve seen in the past from him. He sounded much more like a guy who clearly understands his play is awful and has to get better. There’s no other way to put it. While he’s at the mercy of this O-Line, there are still things he has to do to make things better for his team. The question is, can he?

While it was certainly not out of the ordinary for us to have adult beverages during our weekly podcast, I think it’s safe to say we NEEDED the alcohol after what we’ve witnessed in recent weeks. We discussed everything from the offense and Ben’s struggles to JuJu’s Dance Machine and much more. It’s the Steel City Blitz Steelers Podcast presented by DEK Roofing Inc. Give it a listen.

My MIL got us a membership to Cooper’s Hawk wine club & I can’t think of a more appropriate gift given how football season may end for us ?

Injury Thoughts… It’s easy to pile on right now but should Roethlisberger really be taking his normal Wednesday off after the way he’s played recently? I get it with the linemen but come on… Derek Watt practicing is a great sign. It’s part of the concussion protocol process and hopefully he can play Sunday… Kevin Dotson was a full participant as well and he’s desperately needed at left guard.

JuJu Smith-Schuster must feel like Kevin Bacon in the movie “Footloose.” He’s been told there’s to be no more dancing. This whole episode is the perfect example of how things are ignored when a team is winning and they are highlighted when a team is losing. I think it’s childish what he does but I also recognize this isn’t the same era I grew up with – things change – and they certainly have in this regard. I just wish Mike Tomlin hadn’t played dumb and addressed it earlier.

I’d like to take this opportunity to wish all of you a very Merry Christmas. It has been one of the toughest years I can remember and I’m grateful for a good many things. Among those are you the readers who come here every day to be informed, enlightened, angered and entertained. I raise an egg nog (with rum of course) to all of you! Have a wonderful holiday! 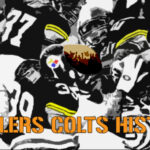