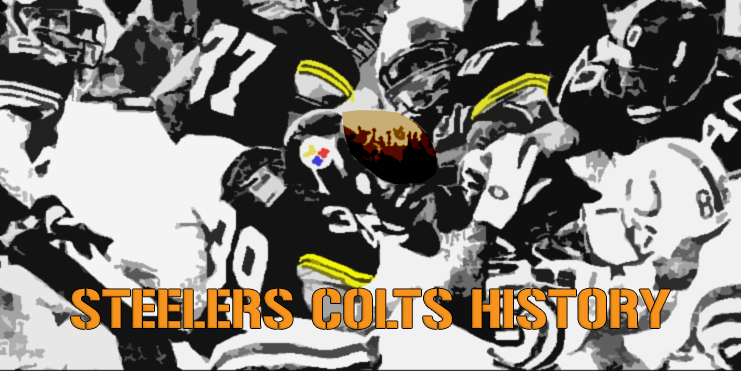 The Pittsburgh Steelers have dominated the Indianapolis Colts with an overall 25-6 record. In Pittsburgh they’ve overwhelmed their opponents 16-2. Post regular season, the Steelers have a 5-0 monopoly including the 1995 AFC Championship game they won 20-16.

Under Coach Bill Cowher, the nineties saw Pittsburgh make the playoffs in six consecutive seasons beginning in 1992.  Their 12-4 record in 1994 was their best for twenty years and the best in the AFC, but they came up short against the San Diego Chargers in the Championship game.

The failure to beat the Chargers stunned the Steelers fans who had been preparing their sunny trip south to Florida for the Super Bowl. Some of the Pittsburgh’s players were even rehearsing a Super Bowl video anticipating a victory.

The Steelers flopped despite holding a 415 to 226 yards advantage on offense. The game came down to the wire as the Steelers moved the ball to the Chargers 3 with one final play. Neil O’Donnell threw a pass to Barry Foster in the end zone which was knocked down by linebacker Dennis Gibson to end the game.

After the game, Chad Brown admitted, “To me, it’s almost like a dream.” The nightmare of those three yards would haunt the Steelers players throughout the offseason.

San Diego’s safety Stanley Richard said, “I wonder what these guys are going to do with their Super Bowl video now.  Maybe we need to get their coordinator over to San Diego so we can get our video going.”

A year later, the Steelers again headed into the playoffs. Having lost Rod Woodson in the season opener, they started 3-4 before managing to finish the season on 11-5. The dynamic Blitzburgh defense played an important in the Steelers season.

Pittsburgh’s opponents in the Championship game Indianapolis finished 9-7. The Colts rolled over the Chargers 35-20 and squeezed passed the Chiefs 10-7 to earn a visit to Pittsburgh.

The Steelers went into the Colts game with a different attitude to the one from the previous year. “You can take games for granted,” admitted Carnell Lake. “San Diego kind of fell into the playoffs and I think we took the game too lightly. We didn’t prepare the way we should have and, consequently, we got beat. It was definitely a lesson we learned – a hard earned lesson.” 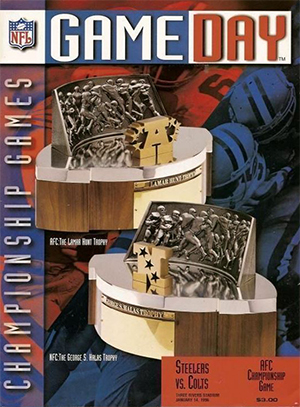 The game proved to be a defensive struggle that began with the Colts intercepting Neil O’Donnell on the second play of the game.

The teams exchanged field goals in the first quarter, before the Colts edged ahead in the second period adding a second field goal.

As half time loomed, the Steelers were moving the ball. On a third and goal, Neil O’Donnell scrambled to find an open receiver. Rookie Kordell Stewart was fighting to find an open position to catch a pass. His left foot went out of bounds before he made the second touchdown catch of his career.

The NFL rule stated a receiver cannot leave the field of play and then return to make a catch. The officials gave the touchdown because none of those in the vicinity saw Stewart step out of bounds. The Steelers took a 10-6 lead into the locker room while their opponents were a little miffed.

Six minutes into the final period, Jim Harbaugh found Floyd Turner with a 47-yard touchdown catch and the Colts found themselves beating the odds and taking their first lead of the game.

After the Steelers next drive stalled, the game appeared to be slipping away from them as the Colts moved the chains. On a third and one, Steelers Willie Williams shoestring tackle of the Colts running back halted their drive and forced them to punt.

The Steelers began their drive from their 33 with a final opportunity to put the heartbreak of the previous season’s loss behind them. O’Donnell completed passes to Kordell Stewart and John L. Williams before threading one to Andre Hastings between three defenders.

A 37-yard pass to Andre Hastings put the Steelers on their opponents 1 and Bam Morris punched it in and the Steelers were back in front once more with just 1:34 left.

The Colts were not about to give up and Harbaugh guided his team from their 16 to the Pittsburgh 29. With five seconds remaining he fired a pass into the end zone. The final act in the Championship drama saw the ball hang tantalizingly in the air as a cluster of outstretched arms reached out eagerly to haul in the pass.

The ball was tipped, and the Colts Aaron Bailey in the end zone, tried to grab it with one hand.  As he fell, the ball rolled across Bailey’s chest, down his left arm and onto the turf. For several seconds the players were not sure what had happened except for the two Colts who put their arms in the air to signal a touchdown.

The Steelers’ Williams believed Indianapolis had snatched a last gasp win. “I thought he caught it,” Williams admitted. “I was in disbelief. It was sick. I can’t explain what I felt. I kept looking at the referee and finally he signaled incomplete.”

The referee’s incomplete signal saw the Steelers sideline erupt and invade the field to celebrate.

Greg Lloyd expressed the relief of the players, “We waited for one whole year to get this trophy (Lamar Hunt). It means so much.”

“Maybe it was poetic justice,” said Bill Cowher, who had tears in his eye after the biggest win of his career. “Now I’m 1-1. It was a great feeling.”

The Steelers went on to lose the Super Bowl to Dallas, but Coach Cowher remained to take the Steelers to Detroit for Super Bowl XL and bring their fifth Lombardi trophy back to Pittsburgh. 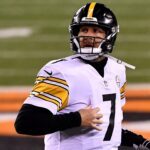