There are two types of ‘piling on’ I’m going to discuss here. The first is about my piling on of the Steve Nelson situation and the second is about the fans piling on him. A lot went down yesterday between the Pittsburgh Steelers and cornerback Steven Nelson and I detailed a lot of it last night but it was the second time in as many days that I had commented heavily on the issue so I’m ready to move on now. Not much can be done as Nelson is now free to sign with any team he chooses. As for the second part of this ‘piling on’ this one goes to the fans who aren’t happy with Nelson. The only leg these fans have to stand on is that Nelson bet on himself, asked for way too much and finds himself on the open market. But this wasn’t all his doing however. Clearly the Steelers made a choice to move forward with Joe Haden after Nelson’s demands were too rich for the team. Don’t blame Nelson for that. The Steelers put themselves in this position through years of living on the salary cap edge. With the pandemic and big contracts to several players (and at least two more coming), Pittsburgh’s hand was forced. People need to stop coming at Nelson. That’s the point I’m making because after all, the last time I checked, the NFL is still a business.

Steelers’ WR Chase Claypool was shown in what was called a “fight” in a Southern California bar. The post is from TMZ.com and it clearly shows Claypool involved. The definition of the term ‘fight’ has changed a lot since my younger days I can tell you that much. Look, I’ll say the same thing I said about Ben Roethlisberger many years ago. When you’re a professional athlete you are under the microscope. That doesn’t mean you can’t live your best life but you have to be careful about the situations you put yourself in. Claypool, like Big Ben before him and JuJu Smith-Schuster and many others, is going to make mistakes on and off the field. It’s part of maturing and dealing with fame.

Tweet of the Day… Pretty much my take as well.

Just watched the Chase Claypool "fight" video.
– It is from 11 days ago.
– He pulled people off each other.

He should be mindful of the company he keeps, but other than that, I'm not seeing much from Claypool here.

After visiting Alabama yesterday (where many of the top prospects didn’t workout), Kevin Colbert and Mike Tomlin have another day of serious scouting to do.

I would expect to see a heavy Steelers’ presence at USC where there are OL, LB, WR and DB prospects. South Carolina and Michigan State also have a couple of guys in WR Shi Smith and DB Shakur Brown that could get interest from Pittsburgh. 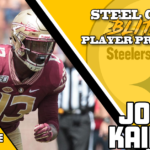