As I always say, you take a win in the NFL and you don’t apologize for a damn thing. At 4-0 now, the Pittsburgh Steelers will take their 38-29 win over the Philadelphia Eagles and run with it. There were some huge positives, yet some negatives remain. Let’s dive in.

-Did you know the Steelers were good at drafting wide receivers? Rookie Chase Claypool ran in one score and then caught three more for a total of four TDs on the day. It’s abundantly clear that Ben Roethlisberger not only trusts him but is more than willing to go to him in crunch time situations.

-As for Big Ben, he ran the offense splendidly. Seeing him work in person gives you such a better view because you can often see what he is seeing. You don’t always get that view on TV. He continues to take care of the ball and is more than willing to take what the defense is giving.

-Rookie Kevin Dotson was inserted early after the departure of David DeCastro due to injury. He was cited for a legitimate holding call but otherwise was really solid again.

-Ray Ray McCloud could, and I stress “could” be one of Kevin Colbert’s better free agent signings. He’s a solid kick returner, has proven he can catch the ball and clearly showed he could run with it too. If you needed any further proof as to why Ryan Switzer was cut then there you go.

-Stephon Tuitt had a really solid game yesterday. He picked up five tackles including 1.5 sacks and was a beast in the run game. I’m hopeful this is the launching pad for more dominance from him.

-Matt Canada’s influence is growing on the offense. The motion is getting faster and it’s coming from multiple people and it’s definitely having an effect on how things are unfolding for the offense.

-Another strong game by Mike Hilton who had eight tackles and a sack. He did get beat in coverage a couple of times but so did several other DBs.

-I don’t care what anyone tells me; the Steelers’ secondary is not playing well. They were beaten yesterday repeatedly by second team receivers. If the pass rush can’t disrupt the QB then the secondary is struggling mightily to cover. If the Eagles’ receivers could get open like that what will the Browns’ receivers do?

-A couple of key injuries yesterday… David DeCastro left early with an abdominal injury. Diontae Johnson left early as well with a back injury. No idea yet on their status for next week.

-I was disgusted yesterday by a couple of things I saw at Heinz Field. First, the Steelers allotted up to 5,500 for capacity yesterday and could only muster 4,700. Secondly, many Steelers’ fans who won the opportunity for tickets turned around and sold them on secondary markets which leads to my third gripe. Most of those tickets were scooped up by Eagles’ fans who were quite plentiful. Lastly, the amount of fans wearing political hats and shirts with their Steelers’ gear was disgusting. Give us a day away from that crap please.

-I don’t know how long Ben can carry this team. He looks great and all, but the running game needs to be more consistent. Granted the numbers will look good today but much of that was on Ray Ray McLoud’s long run.

-The defense is giving up big plays and that’s something you RARELY saw last year. From Miles Sanders’ long run to Travis Fulgham (who?) averaging 15 yards per reception, the defense is not living up to the billing of last season. They gave up 10 first downs on 15 third down attempts which is NOT GOOD. Outside of the Sanders’ run the defense was it’s typical self in that regard but oooof… the big plays.

-I hope I’m wrong here but I think that knee is giving T.J. some issues. Credit him for still making plays but he looked a little less than himself at times yesterday.

Next week the Steelers will play the 4-1 Cleveland Browns who have won four straight after getting throttled by Baltimore in their opener. Even without Nick Chubb, this is a much better team than last year’s version and I can tell you Browns’ fans are already viewing it as one of their most important games in a long time! Defensively, the Steelers have work to do and things to clean up while the Black and Gold offense will need to keep clicking and stay balanced to beat a get defensive unit. 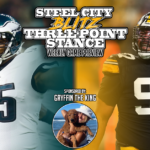