Today formally begins the third and final phase of the Organized Team Activities for the Pittsburgh Steelers. The Black and Gold will hold formal events May 25th thru the 27th, June 1st thru the 3rd and June 7th thru the 10th. Once we get through those three sessions it will be on to the offseason for the Steelers. They will report to Camp in Latrobe in late July and earlier than usual due to their Hall of Fame Game appearance against the Dallas Cowboys. Those two teams will be the only ones to have four preseason games while everyone else plays three. Pittsburgh will host just one preseason game in 2021 which I suppose is fine. While Phase Three won’t get us much more than “football in pajamas,” it does get us closer to the real thing so for me, I’m god with that.

Did you catch last week’s episode of the SCB Steelers Podcast presented by DEK Roofing Inc? We had a lengthy discussion about the depth issues at positions like EDGE, LB and Safety plus we talked about our very first Steelers’ jerseys as well. Tune in!!

Tweet of the Day… Whether you play golf or not doesn’t matter. This is an incredible accomplishment.

“Here he goes again…” Yep. You’re right. Another rant. I see Peter King has his NFL Power Rankings out. First of all, why? It’s May. Second of all, this in’t college football. We don’t need power rankings. I do not care what someone thinks about any team in the Spring. You want to do Power Rankings? How about we wait until August or September at least? I know… Gotta get those clicks.

Has there been more pressure on a first round draft pick of the Pittsburgh Steelers since Ben Roethlisberger? I don’t think so but Najee Harris is going to rank right up there. Let’s recall that Big Ben wasn’t even going to play his rookie season. The goal was to sit behind Tommy Maddox. That went out the window quickly in week two of the 2004 season when Maddox was injured. Harris will face immense pressure to right a running game that has been so wrong in recent years. Make no mistake of his talent and ability but if this offensive line can’t move people then the pressure will grow. 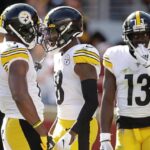 Are the Steelers Trending in the Wrong Direction for 2021?