Good Tuesday to you Steelers’ Fans! And thanks to Ian for wrapping up yesterday’s edition of Quick Hitters. Yours truly was traveling through snow to visit a college with my daughter. Ya, snow… on April 16th. Yuck.

The first phase of the Steelers’ offseason program is underway! I always enjoy seeing the guys come back in the facility after some months away. It reminds me of kids on the first day of school. The first two phases are considered “voluntary” while the last phase is mandatory. This first phase will involve mostly weight training/conditioning along with rehab for some players.

Our grouchy Uncle Ed at the Post-Gazette is ripping on mock drafts. How dare he go after something we love so much!! Actually, he has a pretty good point about the majority of them.

Was a lot of fun @jharrison9292
Let’s go fishing ? pic.twitter.com/5bKsCKWrPN

I wrote this opinion piece on Harrison last night. I understand the feelings people/fans have with Harrison in terms of domestic violence, his often harsh comments and his late career move to the Patriots but I tried to focus on his playing career.

Tweet of the Day #2… I’ll never be confused with someone who knows fashion so you’ll excuse me when I ask this question. It looks like an over-sized fanny-pack that AB has here but does it have a different name?

I’ll be revealing my one and only mock draft next week but at this point I have no clue where I’m going. There are so many possibilities that it will be very hard to narrow things down. What I’m most confident of is that my guy at 28 will likely not be a inside linebacker.

Ian has been hammering out our position previews. Here is his latest on tight ends.

Rudolf Mason? That sounds like a law firm in New York City. The guy he’s asking about is Oklahoma State QB Mason Rudolph. 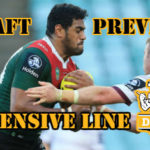