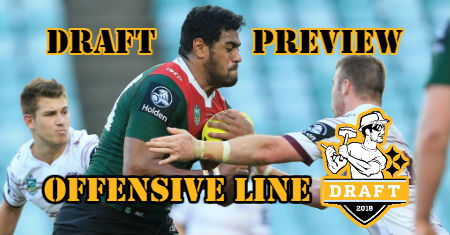 With fewer than two weeks remaining until the NFL Draft, we’ll be taking a position-by-position look at the Steelers roster and where the team has the biggest needs. Despite winning the AFC North Crown and finishing an over-ruled catch (that is now a catch) away from being the #1 seed in the AFC, the Steelers have plenty of needs to address on their current roster. While some believe the Steelers need to focus exclusively on defense in the upcoming Draft, the team has generally split their draft picks between offense and defense. The Steelers will have 7 picks in the draft with no picks in the 4th or 6th round but with 2 picks in the 5th and 7th rounds. Today’s preview will cover the offensive line, which was also covered on Episode 68 of the Steel City Blitz podcast (along with defensive backs).

The top seven (possibly top eight) spots on the offensive line depth chart are secure for the 2018 season. Villanueva, Foster, Pouncey, DeCastro, and Gilbert will once again be the starters. BJ Finney will be the top backup on the interior with Jerald Hawkins stepping into the Chris Hubbard role as the “swing tackle.” Matt Feiler acquitted himself well when forced into duty last season and it is unlikely he will be replaced this season as a guy who can play both guard and tackle. The Steelers don’t have a large need at any position – Ramon Foster is entering the last year of his contract but BJ Finney will be a Restricted Free Agent next year and is likely the LG of the future after Foster’s deal ends. Pouncey and Gilbert both have 2 years left on their contracts.

The only need for a potential replacement in the starting lineup would be at LG when Foster’s deal ends after the 2018 season. The Steelers could look at guards to step into the starting role, but that is not a pressing need at this point. If the Steelers do take a lineman, it will likely be with a Day 3 pick and the guy will be a project player who can hang on the back of the roster for a year or two before being asked to contribute. To their credit, the Steelers had done a good job of scouting and drafting offensive linemen over the last decade. Of the 11 players selected, only 1 had an NFL career shorter than 5 years and 8 have started at least 20 career games.

Potential Prospects: There is not an “elite” tackle prospect in this draft, though Texas’ Connor Williams and Notre Dame’s Mike McGlinchey seem to be the consensus top two and likely first round picks. Notre Dame’s Quenton Nelson is an elite guard prospect and will almost certainly go in the Top 10 (and possibly Top 5). UTEP’s Will Hernandez and Georgia’s Isaiah Wynn are also considered first round talents. At Center, Iowa’s James Daniels and Ohio State’s Billy Price are the top players. Like with Quarterback, the Steelers don’t particularly have a need at any O-Line position so the more linemen that come off the board in the first 27 picks, the better it will be for the Steelers.

The only real interest the Steelers have shown in an offensive lineman was bringing in Australian rugby player Jordan Mailata for a pre-draft visit. Mailata has never played American Football, but his rugby background could prove useful in short-area battle work. Reportedly, he posted good numbers in speed and agility drills and at just 21 years old has plenty of time to be molded into an NFL offensive tackle. Taking raw athletes and turning them into offensive linemen has been something the NFL has tried lately with the Steelers finding some success with Alejandro Villanueva. Mailata seems more like a late-round flier or Undrafted Free Agent. He is the only offensive lineman that has visited Pittsburgh during the pre-draft process and there were no reports of the Steelers showing great interest in linemen at the Combine or at Pro Days. Given that the starters and top backups are secure for 2018, this may be a year the Steelers focus elsewhere in the Draft.

[…] have spent very little time scouting edge rushers and tight ends while almost completely ignoring offensive line prospects. Taking this into account, the Steel City Blitz braintrust got together and created a […]