We finally have some clarification on Mason Rudolph’s concussion. Per a tweet yesterday from Steelers’ PR man Burt Lauten, the independent neurologist has cleared Rudolph and he is able to resume full team activities. Prior to this announcement, Mike Tomlin stated that when Rudolph was cleared he would resume as the starting quarterback. None of this is particularly stunning unless you are one of those fans who believe Devlin Hodges should remain the starter. Allow me to show you a graphic that illustrates why Hodges will not be the starter. 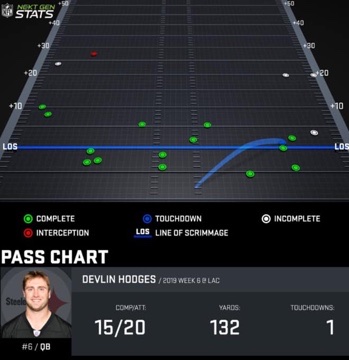 Duck played an excellent game on Sunday night. He was efficient and managed the offense well. However, he only threw five of his 20 passes 10 yards or beyond. One was complete, three were incomplete and one was intercepted. That fact alone is enough to say “Rudolph needs to start” but I’m guessing you need more. Rudolph was just starting to have the entire offense opened up for him and the same can’t be said for Hodges. As I’ve stated in this place before, we like Hodges a lot and think he has a career as an NFL backup at least. But Rudy has put in the time and has the better skills so this really is a no-brainer. Rudy will start when the Dolphins come to town next week.

We’ll record episode 153 of the Steel City Blitz Steelers Podcast presented by 26shirts.com/Pittsburgh tonight and one of the things we will discuss is the use of three safeties Keith Butler has been deploying along with the use of Cam Sutton and Mike Hilton. Tune in!!

Tweet of the Day… The correct answer here is “yes.” Our rule at SCB is never buy a rookie’s jersey. Vets and Hall of Famers are good.

Should I buy a Bettis jersey for my birthday?! I’m struggling with splurging on another jersey

With Stephon Tuitt lost for the season, the Steelers brought back L.T. Walton. He has experience in the system and should provide some important reps but make no mistake, he’s no Stephon Tuitt. I’m told the Steelers contacted a couple of teams about defensive linemen including (which included former Steeler Josh Mauro) but the asking prices were all too high. Hamstrung with no first or third round pick, trading for D-Line help is not going to be easy.

Most of the Steelers are now off and are free to enjoy a few days to themselves before returning to Pittsburgh to prep for Miami. I’ve already seen some players posting to their social media accounts about where they are or where they are headed. Best wishes to all the players on their time off. Yes. Even NFL players deserve some time away.