SCB Steelers Quick Hitters: The “One Tough Son of a Gun” Edition

Mike Tomlin revealed yesterday that pro bowl guard David DeCastro has a broken hand. The injury occurred during the game but DeCastro did not skip a beat and played the entire contest which of course included the overtime. I’ve always expected offensive linemen to be the toughest guys on the team but DeCastro proved just what a tough son of a gun he is by staying in the game. At this point we don’t know his status for Sunday but word is he’ll play with a cast on.

Alejandro Villanueva is a great story. We know of his sacrifice for our country in the Army and we know of his amazing transition from once being a receiver to being an offensive tackle. As amazing as he is as a person, that doesn’t mean I’m not going to be critical when necessary about his play. He completely whiffed on a his block late in Sunday’s game and it was his man that stripped James Conner in the backfield. Drawing attention to a poor play doesn’t take anything away from who he is.

Ben Cnic and Ian broke down the tie with Cleveland last night on the Steel City Blitz Steelers Podcast presented by 26shirts.com/Pittsburgh. Great stuff and honest takes as usual!

Tweet of the Day… I want to take a moment and rant if I may. The below picture of JuJu Smith-Schuster who all of 21 years of age reminds me that sometimes the youth are truly the ones who lead. I say this because apparently Pittsburgh’s number blowhard continues to attack JJSS for reasons known only to him. To my knowledge, JJSS has not taken the bait and I say “good for him.” For the life of me I don’t understand what compels a grown man to behave in such a manner.

Mike Tomlin also mentioned yesterday that Ben Roethlisberger is dealing with a bruised elbow. Big Ben typically gets a light workload early in the week so don’t be caught off guard by the practice reports for today and tomorrow. I’d pay closer attention to Friday for sure. If this is much more serious than thought, Josh Dobbs would get his first career start.

Congratulations to T.J. Watt for winning AFC Defensive Player of the Week honors. Despite his ‘grade,’ given by a certain acronym, being a 70, he still won the award which was most deserving.

JoeB: So Tomlin liked the kicking game – short punts and missed field goal. This explains him thinking Dupree had a similar game to Watt, no?
Ed Bouchette: When he said that, I think he meant the kick return and coverage units not, you know, the actual KICKING of the ball.

JoeB is spot on here as is Ed. There were some real positives in the return aspect but Boswell’s miss and Berry’s punting were also glaring. 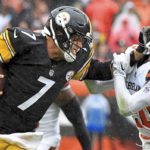 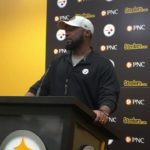