Good Tuesday to you Steelers’ Fans! I’m a little groggy this morning (more on that below) so hang in there with me.

I think it’s fair to say the Pittsburgh Steelers are no longer a 3-4 defense. I think many of the same principles still apply but there are just too many times where specialized defenses are required. Regardless of what we call it, the need for pass rushers is still paramount. If I’ve heard any catch phrase more often than “natural pass rusher” then I don’t know what it is. This phrase has been applied to three guys in particular. Keion Adams, Ola Adeniyi and Farrington Huguenin have all had that attributed to them. This doesn’t mean they are destined for stardom or even to make the roster because there’s a lot more to playing defense than just rushing the passer. All three guys have unique abilities to get to the quarterback whether through speed, power or a combination of both. Of the three, Adams is probably the most “natural” but he has to prove he can do all of the other things required by an outside linebacker as well. Adeniyi is in the ‘James Harrison’ mold because of his frame and ability to be low to the ground while Huguenin is a tall drink of water at 6’4″. Like I said, none of these guys is guaranteed anything just because they are “natural pass rushers” but let’s check in after the preseason and see where they are.

With the Steelers playing on Thursday night we’ll be doing the Steel City Blitz Steelers Podcast presented by 26shirts.com/Pittsburgh tomorrow evening. We’ll talk about the latest from Camp and our expectations for the Eagles’ game.

Tweet of the Day… The reason I’m a little out of it this morning is that I picked up my son last night from the airport. He arrived at midnight from Iceland where he spent two amazing weeks with his buddies. He was able to get a photo with the Terrible Towel while he was on one of his many adventures.

Today is the Steelers’ last practice until they play Thursday night and they could use the work with their rain-shortened practice on Sunday still hanging over them. The biggest question? Who is practicing and who isn’t? Like they say, you don’t make the club from the tub.

I’d like to hear more guys like the Raiders’ Tahir Whitehead talk about the new helmet rule. “You don’t lower your head to initiate contact. At the end of the day, it’s protecting the offensive guy, but most importantly, you’re protecting yourself.” I wish more guys looked at it this way. The NFL in this case is not taking violence out of the game, it’s trying to limit the damage to the individual players by getting ‘the lowering of the head’ out of the game. (quote courtesy profootballtalk.com) 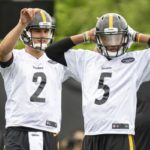