SCB Steelers Quick Hitters: The “Narrowing It Down” Edition

First off, there was no edition yesterday as I had an early flight home from Florida. My trip was great and much needed… As for the Steelers, are we getting to the point where we can start narrowing down some potential first round targets? Well, sort of. First of all, the Steelers have never taken a player outside of the Power 5 conferences in round one under Kevin Colbert with one exception; Ben Roethlisberger. So that eliminates a guy like Zaven Collins of Tulsa. Secondly, the Steelers haven’t drafted a player in the first round that wasn’t scouted personally by Colbert and Mike Tomlin since Ziggy Hood. That right there eliminates a number of offensive tackle Sam Cosmi of Texas and center Creed Humphrey of Oklahoma among others. Again, I’m not saying what will or will not happen but you have to read the tea leaves. If you’re thinking early round running back? That’s complicated. Colbert/Tomlin did not attend the UNC Pro Day where Javonte Williams and Michael Carter were featured. They did however speak with Najee Harris. What am I getting at? It’s simple really. We have no clue where they are going in round one and we likely won’t either.

The Steelers added a linebacker and a receiver yesterday. The receiver, is Mathew Sexton who played his college ball at Eastern Michigan University. He is small, speedy and quick. The linebacker is Jarvis Miller who played four years at Penn State and as a graduate at UMass. Both face long odds of making the team and if they do it will be because of their Special Teams prowess.

Colbert and Tomlin were in South Bend to see the Notre Dame Pro Day yesterday. They rarely miss a Pro Day there because they love Irish prospects. Today will be interesting

For a team that needs an offensive tackle you’d think the Steelers would have a heavy presence in Stillwater for Teven Jenkins. But RB Chuba Hubbard, CB Rodarius Williams and LB Amen Ogbongbemiga are also guys worth watching… Minnesota has a number of players the Steelers could like too. 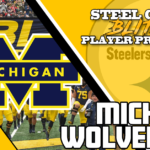 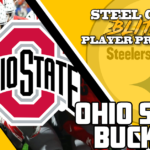 Mock bob 1.0, #1 Alex Leatherwood T #2 Jabril Cox LB #3 Eric Stokes CB #4 Chubba Hubbard RB #5 Tony Poljan TE. Just about all these guys are going to need to slide down the draft board a bit. But i think i covered some needs with some talent.