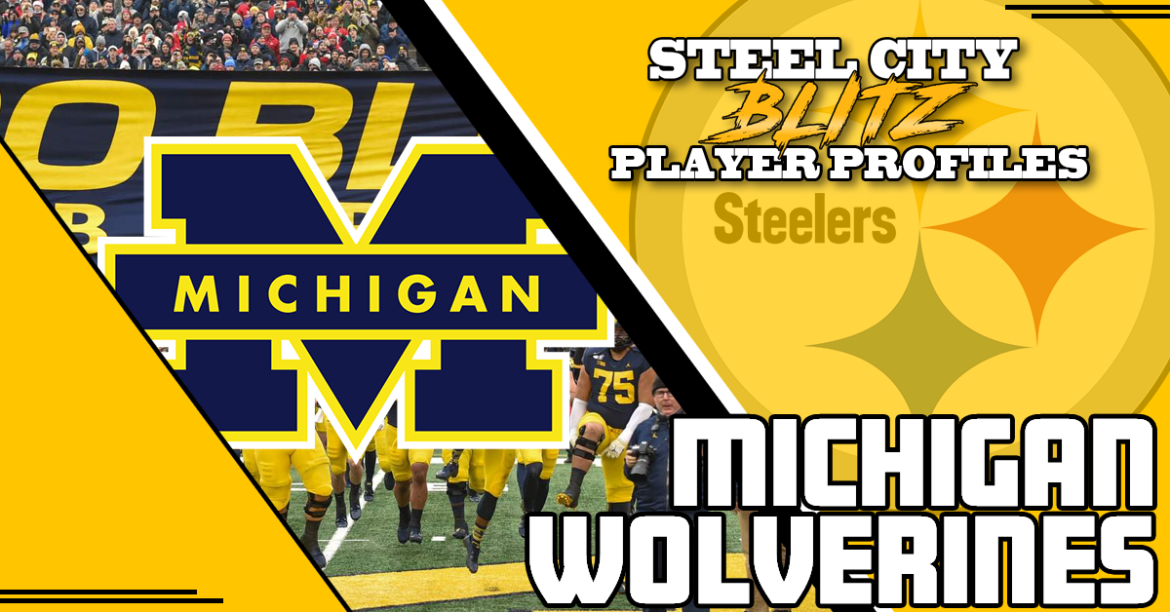 The collegiate Pro Day circuit is in full swing. Kevin Colbert and Mike Tomlin have been making their rounds to the premier schools to evaluate some of the top talent for this year’s NFL Draft. Recently, both Tomlin and Colbert appeared at Michigan’s Pro Day. The significance of this is that the last 10 first round draft picks by the Steelers all had both Tomlin and Colbert in attendance at their Pro Days. Here is a look at the 11 prospects that took part in Michigan’s Pro Day, which has an extra importance this year with no Combine.

Thomas opted out of the 2020 season, so the most recent tape on him is from 2019. He has played in every game since his true freshman season. As a junior, Thomas posted 3 interceptions, 4 passes defended, and 2 fumble recoveries. He did take part in the Senior Bowl. He is a solid tackler whi is not afraid to stick his nose in against the run. He played well in press man situations and with a reported 4.37 40-yard dash at his Pro Day, certainly has the long speed to run with receivers down the field. He can play either inside or outside, though may give up some height against the taller NFL receivers and is not great at battling in the air. That said, Thomas is a physical corner who is a former receiver and has good ball skills and awareness. He is also one of the best tackling corners in the draft, though his physicality can cause him to draw some penalties when grabbing and holding down the field. Thomas can also contribute on special teams, both on coverage units and as a kick returner.

Ben Mason is a pancake machine in the Michigan backfield, lining up as both a fullback and in the tight end/H-back role. He is relatively athletic for his size, and his highlights at the Senior Bowl were capped off by some devastating blocks. Mason was originally recruited as a linebacker but switched to fullback and brought that same hard-nosed attitude. Back in the 1990s, he would’ve been an ideal lead blocker for any team’s rushing attack. However, in the 2021 NFL he is going to have to go to a team that can carve out a role for his skills. He did display excellent short-yardage dive back abilities, rushing for 7 TDs in 2018. He is not much of a receiver out of the backfield and is much better as a run blocker than a pass blocker.

I wouldn’t have even included him on the list if the dude’s name wasn’t “Cheeseman.” Remember the book The Stinky Cheese Man and Other Fairly Stupid Tales? That was a classic of my childhood. Chesseman might be the best long snapper in the class, but wasting a draft pick on a long snapper would indeed be a fairly stupid tale.

McGrone is coming out after his redshirt sophomore season, which was cut short by an ACL injury. He is still recovering from the injury and only participated in the bench press drill during Michigan’s Pro Day. His medical evaluations are going to be critical for his draft status. His best season came in 2019 when he had 66 tackles, 9.5 TFLs, 4 sacks, 1 pass defended, and 1 forced fumble. When he was on the field, McGrone displayed good athleticism and the ability to play sideline-to-sideline. He could slice through gaps in the offensive line to make plays in the backfield and is a downhill defender attacking the ball. His pass defense could use some work and he is likely a developmental prospect with upside who can (pending medicals) be an immediate special teams contributor with the potential to step into an inside linebacker role in the future.

Kemp is an interior defensive lineman who played the nose tackle role, but will likely need to add bulk if he is going to stay there in the NFL. His best spot in the NFL might be as a 3-technique on the inside where he can use his lateral agility to attack gaps and bot be asked to anchor the middle. He displayed some ability to collapse the picket, recording 5 sacks in his Michigan career. He was also a two-time team captain and reportedly has excellent locker room leadership and character. Kemp will need to get a lot stronger to hold up in the NFL as an interior run defender, but he could start his career in situational pass rush situations where he can use his explosiveness to attack gaps rather than trying to anchor.

Not to be confused with Captain America, Chris Evans the running back is highly athletic who put up great numbers at his Pro Day. Evans missed the 2019 season due to academic ineligibility but came back to play in 2020. Despite his athleticism, he did not have the most productive career at Michigan. His best years came early in his career. As a freshman, Evans ran for 614 yards (7.0 YPC) and 4 TDs. He followed that with 685 yards and 6 TDs as a sophomore, averaging over 5 yards per carry, and added 16 catches for 157 yards and another score. After missing the year due to suspension, his senior season saw his yards per carry drop below 5 for the first time in his career, and he was used sparingly. Evans is a decent receiver out of the backfield and if he finds the right coaching situation in the NFL, could turn into a late-round gem if his athleticism can be honed with technique.

Mayfield initially opted out of the 2020 season but then decided to play. However, his season was cut short due to an injury suffered in the second game of the year.

Paye is in the conversation for the top EDGE in the class with Penn State’s Jayson Oweh, Georgia’s Azeez Oljuari and Miami’s Gregory Rousseau. He is explosive off the edge, quickly getting around opposing linemen. However, he opted not to run a 3-cone drill at his Pro Day, so his numbers in one of the most predictive metrics for edge rushers is unknown. Paye did put up very good numbers in the drills he did complete. In addition to the explosiveness, Paye displays quick hands and a powerful base to be able to bull rush his way into the backfield. He is coming off a season where he missed 2 games due to injury, so his medical evaluations will certainly be important. He is still a bit raw and is not a great run defender. Like some other raw pass rushers, he does tend to get lost when his initial move is stifled and will need to work on developing counter and secondary moves. Paye was not the most productive pass rusher in college (just 11.5 sacks in 3 years) but his athleticism and upside tend to be what NFL teams will gamble on early in the draft.

Eubanks checks a lot of boxes athletically, but never put it all together on the field at Michigan. His size gives him an ideal frame for an in-line tight end, but he is a sub-par blocker in both the run game and in pass protection. He tested very well athletically with a sub-4.6 40-yard dash which is an elite time for a tight end. His 3-cone drill was also very good for a tight end, and on tape he does show off those traits with the ability to get down the seam and stretch the middle of the defense. Eubanks is also good at locating the ball in the air and high-pointing the throw, but in traffic he can be a little hesitant of contact and needs to use his frame better to box out defenders. His athletic upside will probably be enough to get him to an NFL training camp in the fall, either as a late-round pick or an undrafted free agent.

Collins opted out of 2020 but did take part in the Senior Bowl. He tested very well athletically at his Pro Day, including a blistering 4.43 40-yard dash which is impressive at his size. Collins’ speed is mostly straight-line speed and he is not sharp out of his breaks or explosive off the line. It takes Collins some time to get up to top speed but when he does he can blow by defensive backs. Collins is a natural hands-catcher and snatches the ball out away from his frame. He uses his size well to ward off defenders and wins combat catches. Collins is a very good downfield receiver but there are some questions about his route-running and ability to get open across the middle of the field. If he is seen as a “one trick pony” he may fall to the 3rd round like other guys who were seen as pure deep threats in the past, but he certainly has the upside to be an impactful player.

Nordin, like many collegiate kickers, had an inconsistent career. He was a highly-recruited high school prospect but never developed the consistency to be considered an NFL prospect. As a freshman he booted 2 of 3 from over 50 yards with a  long of 55. His freshman year was his most consistent, but he still hit just 19 of 24 (79%). Nordin nailed a career-long 57-yarder as a junior but followed it up by connecting on just 2 of 5 as a senior.

SCB Steelers Quick Hitters: The “Narrowing It Down” Edition