The players are off today and Head Coach Mike Tomlin will hold his weekly press conference at noon. It’s expected that he will discuss Sunday’s win, injuries and that the Bengals are Super Bowl-worthy. (Yes, that’s a touch of sarcasm)

Speaking of the Bengals… Head Coach Marvin Lewis pulled what I call a “Belichickian” move yesterday when his team signed former Steelers’ tight end Scott Orndoff. Patriots’ coach Bill Belichick is notorious for signing players who have already been with the team he is facing that week. The idea is simple; pull everything you can from them in hope of gaining an edge. Let’s face it; Lewis has to know this is it for him. He’s going to do whatever is necessary to win.

A very interesting trend is occurring when it comes to Le’Veon Bell’s success and starts made by guard B.J. Finney. In his four starts, Finney has helped lead the way for Bell’s 100 yard plus performances each time. I like Ramon Foster a lot as a person and as a player but how much longer can the Steelers ignore what is going on here?

Tweet of the Day… Is this the truth or what???

If I had Le’Veon Bell’s patience in every day life I would be an above average parent. pic.twitter.com/WHf2b4309S

Watched the coaches film just prior to publishing this… Anthony Chickillo clearly clips Mike Mitchell’s foot as Mitchell is starting to line up Alex Smith. That much is clear. After that there is really no way to know Mitchell’s intent. Unfortunately his past is what is giving people reason to to say it was a cheap shot.

Believe what you want regarding Martavis Bryant and a request for a trade but the fact is his agent requested it. Regardless, he isn’t going anywhere unless someone offers the moon and stars and perhaps some planets too. He has a whole other year remaining on his contract.

The Steelers are 6-3 versus the Bengals in Heinz Field in their last nine meetings there. They are 7-2 over that same span in Paul Brown Stadium.

This year the Steelers are 3-1 on the road and 1-1 at home. Good news? Lot of home games left and that Green Bay game suddenly looks a tad easier. Better news? Three wins on the road already could bode well for trips to Detroit, Indy and Houston. 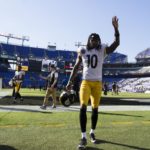