Steelers’ wide receiver Martavis Bryant was given the go ahead to practice and participate with the team last evening. He is still not “fully reinstated” however and I’m going to refer you to this piece Ben Anderson wrote back in April.

One more thing on Bryant that it’s important to keep in mind… while I’m just as excited as you are about having Marty back on the field, let’s remember why he’s been absent for over a year. He isn’t returning from an injury suffered while saving little Timmy from a well. Let’s support him as a person as much as a player because he’ll need that.

With Devonta Freeman getting a new contract in Atlanta that pays him around $8 million per season, there will be assumptions that this will alter things with Le’Veon Bell. Wrong! The Steelers made a more than worthy offer but Bell is betting on himself. We won’t know anything until the season plays out in terms of what happens with Bell but rest assured he isn’t signing for only $8 million per season.

Tweet of the Day… Love Da Beard but these hats man….

Thanks @steelers, @CoachTomlin and the greatest fans in the world #SteelersNation. Great to be back in Latrobe! pic.twitter.com/Ukr5ujPtPa

With Josh Dobbs getting the start in his first-ever game tomorrow, I took a look at what Dobbs will need to show to maintain his rising stock level.

For those of you wondering who is practice squad eligible and who isn’t, Bob Labriola of steelers.com has the list.

Huge thank you to Carole (@steelercam) who shared her pictures of Training Camp with me yesterday! Beautiful day in Latrobe!!

Our Chris Garman, who is one of our two spies in Bengals’ Country, reports that the fans there are very excited over Carl Lawson who is having a great camp. Lawson was a guy a lot of Steelers’ experts liked coming to us in the draft in the first round but he wasn’t even selected until the fourth round. Injuries and a consistent ability to stop the run were two of his negatives. As they say, we shall see!

Steel City Blitz Podcast Presented by 26shirts.com/Pittsburgh will air tonight at 10pm Eastern. Tune in for the knowledge and stay for the laughs. 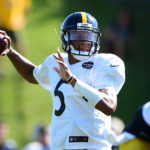