TGIF am I right Steelers’ fans???

Jeremy Fowler of ESPN reports that Steelers’ wideout Martavis Bryant wants to have a ‘man to man’ talk with Ben Roethlisberger over the quarterback’s comments following Bryant’s year-long suspension. If anyone can understand the perils of youth it’s Big Ben. Just this week Bruce Arians revealed in his book what we already knew about the young QB. The problem I have however is that Bryant isn’t in any position to be demanding sit-downs with Roethlisberger. Bryant did let him and his team down and there’s no other way to cut it. He lied to Roethlisberger plain and simple so if anyone wants a meeting it should be 7.

I think there’s a lot more to Wes Saunders’ essentially being barred from all NFL teams than we know about. The former Steeler and Colt claims to just love football and wants another shot which is admirable but something just doesn’t seem right to me. Perhaps it’s time for Saunders to get on with his life’s work.

Did you catch the Steel City Blitz Podcast Presented by 26shirts.com/Pittsburgh last night? Ian made his debut last night and I quickly realized that between he and Ben I have very little work to do!

Tweet of the Day… Unbelievable photo from Dave DiCello

Make sure you are following along with Ian’s ‘Ten for Tomlin’ series. Really good stuff!

Really good stuff on steelers.com with former Steelers’ running back Barry Foster. If you think Training Camp is tough for the players now, think again.

The Post-Gazette’s Paul Zeise believes the Steelers should NOT sign Le’Veon Bell to a long term deal. I understand his concern but I think both Ben and Ian laid it out perfectly on the podcast last night as to why you sign him long-term. He’s a Hall of Fame talent who would still not be 30 after his second contract ended. The Steelers don’t do contracts anymore that they can’t get out of and this would be another situation like that should he have more injuries or off-field issues. 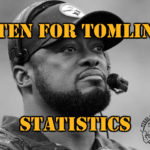 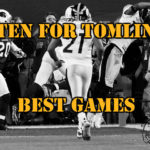