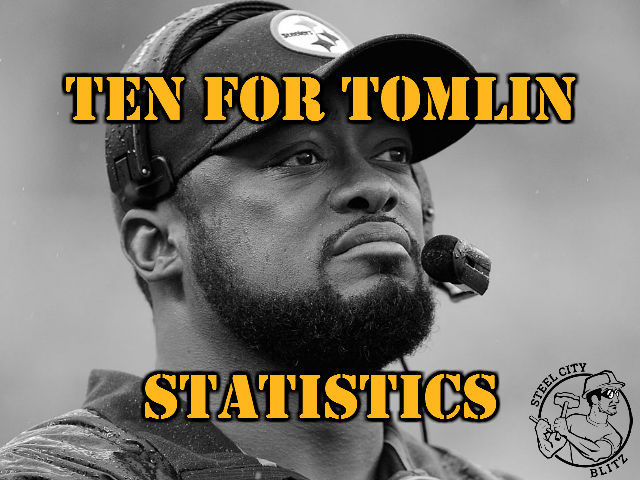 The 2017 Season will be Mike Tomlin’s 11th as the head coach of the Pittsburgh Steelers. With his decade at the helm, he is currently the fifth-longest tenured coach in the NFL. Only Bill Belichick, Marvin Lewis, Mike McCarthy, and Sean Payton have been in their respective positions longer than Tomlin. As we count down the days until the start of Training Camp and the start of the 2017 season, we’re taking a look back at Mike Tomlin’s 10 year tenure as Steelers head coach. The “Ten For Tomlin” series will be 10 posts each featuring 10 items from the past decade. We start today by looking over some key statistics of Tomlin’s tenure.

Tomlin has won the AFC North title in exactly half of his seasons to date. In that time, only the Patriots (9) and Packers (6) have won more division titles than the Steelers. The Colts and Broncos have also won 5 division titles in the last decade, but did so with multiple coaches.

Tomlin has 7 playoff appearances in 10 seasons with an 8-6 record. The Steelers’ .571 playoff winning percentage is 9th in the league while their 8 postseason victories tie them for 5th with the New York Giants. The Patriots have led the way with 13 playoff wins while the Ravens, Seahawks, and Packers all have 10.

Tomlin has reached the AFC Championship in 3 of his 7 postseason appearances. The Steelers have gone 2-1 in those games with a victory over Baltimore in 2008 and a victory over the New York Jets in 2010. Their loss came last season against the eventual Champion New England Patriots.

While the Steelers offense improved over the last decade, the defense saw a significant decline. The unit was one of the best in the league when Tomlin took over but due to the aging of the veteran core, they have not been able to return to their early standard. From 2007 to 2012, the defense ranked 1st in the league in total yards 4 times and second another time with the low point being finishing 5th in 2009. Since 2013 they have not finished higher than 12th in total yards allowed. The story was similar on the points allowed side as they finished 1st in the league 3 times and second once during Tomlin’s first six years. They started to return to form last year with a Top 10 finish.

Over the decade as a whole, the Steelers have allowed the fewest points of any team in the NFL, averaging just 18.6 per game. The Patriots are the next closest team but have given up nearly 100 more points in that timespan. The Steelers also rank third in the league in point differential, having scored 808 points more than their opponents. This mark is well behind the Patriots +1762 and Packers +1009 but also well ahead of the Saints +556. The Steelers have also allowed the fewest yards per play as a defensive unit, the only team in the last decade to average under 5 yards per play at 4.949.

The Steelers have performed very well in primetime under Mike Tomlin. Their 47 primetime appearances trails on Dallas and the New York Giants. The Steelers are 31-16 in those games and their .660 winning percentage is the third highest in the league (behind Seattle’s .788 and New England’s .744). Additionally, the Steelers 31 primetime victories are second in the league behind only New England’s 32 wins. The Steelers have been able to defend Heinz Field to the tune of a 16-5 record (.762 winning percentage). The Steelers have been at their best under Tomlin on Monday Night Football with an astounding 11-2 record. Only Seattle’s perfect 8-0 mark has been better on Monday nights. The only thing NBC loves more than the Steelers on Sunday Night Football is the NFC East. The only teams to make more SNF appearances than Pittsburgh are Dallas, New York (Giants), and Philadelphia. The Steelers have gone 14-8 on Sunday Nights and their 14 wins are second only behind the Cowboys. Thursday nights have been the worst to the Steelers as they have gone just 6-6.

This is one of the most controversial statistics of the Mike Tomlin era. There are two different schools of thought regarding what constitutes a “losing team.” There are those who think that a “losing team” is one who has a losing record at the time they play the Steelers. The other camp believes in defining a team by their body of work over a whole season and that a “losing team” should be defined as one who finished the season with a losing record. Case in point are the 2016 Miami Dolphins and 2015 Kansas City Chiefs. Both had losing records when they faced the Steelers but wound up winning 10 and 11 games respectively and making the playoffs. Should the Steelers losses to a 10-win team and an 11-win team be counted as a “loss to a team with a losing record”? We say no, the games that should count are those against teams like Philadelphia in 2016 that even though they had a winning record when they played the Steelers, finished the year below .500.

For those that have been following me on Twitter for a while, you’ll know this is one of my favorite stats to harp on. Mike Tomlin has inexplicably bad splits outside of the Eastern Time Zone.  Under Tomlin, the Steelers are 101-44 (.700) in all games played in the Eastern Time Zone. Obviously, being that our home games are played in Eastern Time, this number is slightly inflated by our 64-23 (.736) home record, which is also third best in the league. When the Steelers leave home within the Eastern Time Zone, they are 37-21 (including their Super Bowl XLIII win in Tampa, which was a neutral location). This .638 winning percentage is second best in the league in road/neutral EST games (behind only New England’s .685).

Given that the Steelers win about two-thirds of their road/neutral EST games, it is utterly shocking that they have posted a mere 10-19 (.345) mark when they leave the Eastern Time Zone.  Broken down by time zone, the splits start to look even worse. The Steelers have won just 44% of their games in Central time and less than a third of their games in Mountain and Pacific time. Their 2015 win against the Chargers was their first victory in the Pacific Time Zone since 2005 when they also won in San Diego. In fact, the Steelers last 3 wins in Pacific Time all came in San Diego, who just lost the Chargers to Los Angeles. Their last PST win outside of San Diego was in San Francisco in 1999.

[…] sure you are following along with Ian’s ‘Ten for Tomlin’ series. Really good […]

[…] series will be 10 posts each featuring 10 items from the past decade. We started by looking at key statistics and recapping the best games. Today, we flip the coin and recount some of the worst games of the […]

[…] series will be 10 posts each featuring 10 items from the past decade. We started by looking at key statistics and recapping the best games and worst games. Today we turn to the player-personnel side of the […]

[…] series will be 10 posts each featuring 10 items from the past decade. We started by looking at key statistics and recapping the best games and worst games. Yesterday, we turned our focus to the […]