With less than a week to go there are any number of theories about where our Steelers go in round one of the NFL Draft. Here’s an idea that I’ve been ruminating on lately. What if the Steelers aren’t as into the two inside linebackers as everyone assumes they are? What if they are both gone early anyway and the Steelers are left with other options? One potential option could be offensive tackle. Hang with me while I explain. Alejandro Villanueva will be 31 years old in September. I do not see him getting another big contract. We are all assuming that Matt Feiler is the heir apparent to Marcus Gilbert’s vacated right tackle position. And even if it isn’t him it has to be Jerald Hawkins or Chuks Okorafor right? But what if one of those top tackles falls to 20? I say this because no one ever dreamed David DeCastro would fall as far as he eventually did so anything is possible. If I’ve learned anything with Kevin Colbert it’s that what the fans want and believe should happen is not always what Colbert and company think the team needs. I am not suggesting the Steelers will get one of these top tackles but do not be surprised if it happens. That’s all I’m suggesting.

Look for Ben Roethlisberger’s contract to get done soon. I don’t think Russell Wilson’s had as much to do with the delay as some think but it may have been a factor.

Tweet of the Day… Uncle Ed nails what so many of us have experienced.

I really think four QBs go int he first round and that may even happen if Kyler Murray goes first and Josh Rosen ends up on one of those QB needy teams like a Miami or Washington. That said, I no longer think that really helps the Steelers the way I did even a week ago. There’s too much hype around Devin White with Tampa and Cincinnati and with Devin Bush with those teams plus Green Bay or Denver to think we have a shot at either.

Anyone else remember the days when the NFL Draft was all about running backs? How times change right? We’ve gone from teams looking for that guy who will solidify their backfield for a decade to teams taking QBs in the first round who aren’t even close to first round material. Crazy.

Keep a really close eye on the Steelers once the Draft enters Day 2. I really think they’ll move up in the second or third round. Ten picks is just too many to keep for this Draft in my opinion.

One of the good Steelers’ Twitter handles out there is Blitzburgh. They constantly update you on the latest happenings in Steeler Nation. They’ve been suspended by Twitter likely for using something that was copyrighted but I’m not certain. What is distressing is that it sounds like another Steelers’ site may have reported them. The only time this would ever cross my mind is if another site was blatantly stealing our work. I don’t know exactly who reported them but I have my suspicions.

Pat Tillman died 15 years ago today. This is not the place for politics so I’m only going to say this; please read books about him and his death to educate yourself. I suggest books by Jon Krakauer and Tillman’s mother Mary.

We will be recording the Steel City Blitz Steelers Podcast LIVE when the Steelers select Thursday night. This will probably be a PG-13 rated show just so you know…. 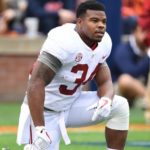