The recent arrest of Steelers’ cornerback Artie Burns is alarming but I don’t see any reason to get worked up over it. Remember that this young man has been forced to be a parent to younger siblings and I’m in no place to judge. At that young age there’s no way I could pull off what he has so yes, he made poor decisions and was guilty of being negligent but leave it at that. He wasn’t using drugs and wasn’t waving a gun around either. Unless we see repeated behavior I’m not stressing over this.

After a technological nightmare last Thursday night, we had a pretty darn good podcast on Friday. We’re gonna give it a go again this Thursday and yes, Tay will be sitting in for Cnic again.

Tweet of the Day… Very nice honor for Hines.

I am honored to be named Honorary Goodwill Ambassador to the 2018 Winter Olympic Games in PyeongChang South Korea.

I think there are some fans who sometimes confuse all of the amazing things James Harrison does in the weight room and how that translates on the field. Ideally, the Steelers want Deebo to be limited in his snaps. The fewer plays the fresher he will be. Keep in mind he’s 39 and needs T. J. Watt to step up big time in order to give him the breaks he needs. That said, it’s still incredible to see him performing at a high level at the linebacker position.

We are planning to overhaul the website this coming weekend so be patient if you’re having trouble connecting with us.

As I eluded to on Twitter, we have an awesome addition to our crew coming. Our site will be instantly better and our content broader. I’ll be announcing the edition on the podcast and then in a post on Friday.

I have no idea just how serious DeAngelo Williams is about wrestling long-term but he’s off to a great start. Check out his social media for video.

Have an outstanding holiday and be safe Steeler Nation! 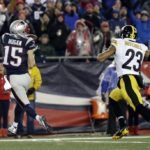