Numerous reports suggest the Steelers will get a new deal done for QB Ben Roethlisberger prior to the Draft. That’s not exactly a lot of time considering the Draft begins Thursday evening. At 37 years old this deal will be the final one for Big Ben. There stands a decent chance that the team will add a couple of “phantom years” at the end as they did with Troy Polamalu and Heath Miller. Getting the deal settled prior to the Draft does a couple of things. It takes the topic off the media table which is important because the longer it goes the more negative speculation there will be. It also creates more cap space where draft picks can be signed, minor trades can be made and allows money to be available for a free agent veteran should the need arise. While I think the Russell Wilson deal may have had a slight impact I think this overall has been about a lot tweaks by both sides. Let’s hope it gets done as soon as they claim it will.

[UPDATE]: Roethlisberger has agreed to a two-year contract extension taking him through 2021.

Catch up with our latest Steel City Blitz Podcasts presented by 26shirts.com/Pittsburgh! We covered the Draft preview of the Safeties and our look at the top cornerbacks will be out later today!

My useless prediction: #Steelers want to extend Ben before draft in effort to facilitate a draft-day trade w #Jets for Darron Lee. Take $3m cap hit comfortably after Ben ext., give up maybe a cond sixth for Lee. Ext next offseason if hes good, let walk for comp pick if not in '20

The Seattle Seahawks now have two selections in the first round after trading Frank Clark to the Chiefs. Seattle realized they weren’t going to be able pay him and Bobby Wagner so he’s been jettisoned to the AFC. I think there will be more trades coming in the next 24 hours too.

Can we please get JuJu Smith-Schuster off of these Madden 20 covers? What more information do we need that the Madden Curse is areal, living thing? Not sure about this? Look at last year’s cover and tell me about it…

I’ll be issuing my first and only mock draft this week. Read, react and do what you do Steeler Nation.

I’m really excited about what we’re planning to do for the Draft tomorrow night. I’ll have the crew assembled and we’ll be recording our Steel City Blitz Steelers Podcast presented by 26shirts.com/Pittsburgh while the Steelers are drafting. I expect foul language and a variety of hot takes. You won’t want to miss this one! 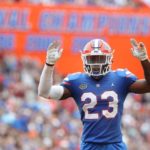 The Odds Seem to be Stacked Against...