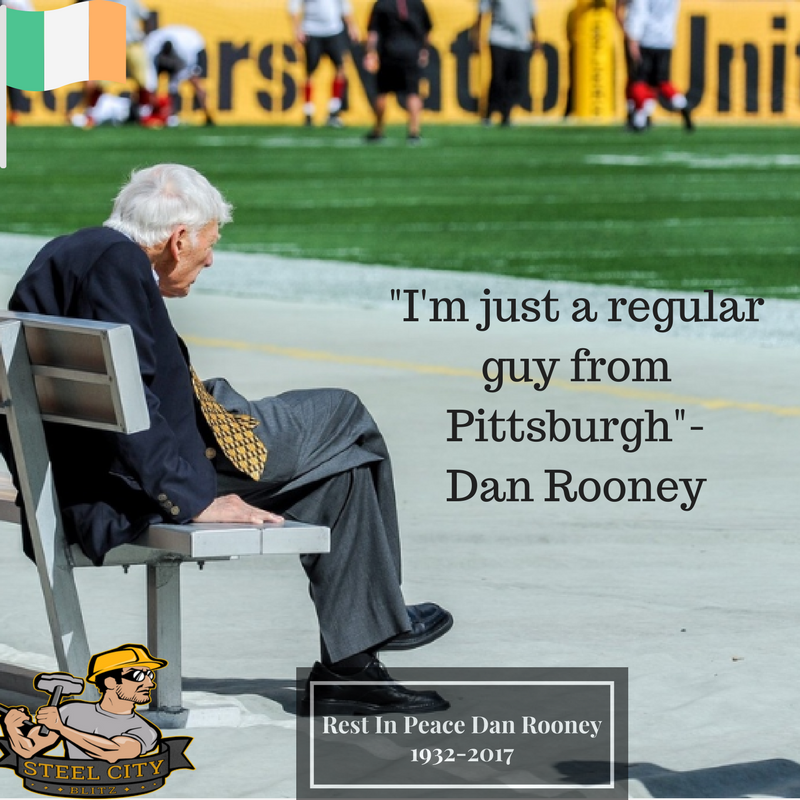 It is with great sadness that I say “Good Morning” to you Steelers’ Fans.

Regardless of how old someone is, their passing is never easy. So many of us never had the chance to meet Steelers’ Chairman Dan Rooney yet his loss has left a void for me and so many others who proudly wear the Black and Gold. As an educator, I’m a strong believer in understanding history and I encourage you to look back on Mr. Rooney’s life. The impact he had on football is so much greater than most realize.

Last night on the Steel City Blitz Podcast, we spent the first portion discussing Mr. Rooney. (I apologize for the choppy audio at times)

Tweets of the Day… There were so many eloquent and special messages yesterday that sharing one doesn’t seem right. Here are several I really liked about Mr. Rooney.

Sometimes during the offseason we'd have to pay $6 for lunch. I questioned it until I saw Mr. Rooney paying his $6 for lunch. #character

..for practice, games and the in between. Thanks for the handshakes and smiles during the low times, as well as the championships! Love you! pic.twitter.com/0QIKLcouKa

Deepest respects to a legendary person/owner. Thank you for everything u did for me & this great city! Prayers up to the whole Rooney fam?? pic.twitter.com/Sm7QWfoxFs

Some other Steelers’ thoughts to close…

Senquez Golson should be thanking his lucky stars today. Within hours of his own issues, former Tampa Bay Buccaneer wide receiver Louis Murphy was in fact arrested and could face a maximum sentence for bringing his handgun into the airport. Golson was not arrested and the only reason was that the clip had not been loaded into the gun. Despite having the gun and 23 bullets, Golson was able to avoid arrest. He will not be so lucky avoiding Roger Goodell however.

While I won’t be a bit surprised if the Steelers draft a quarterback, I really hope they don’t. This draft is so deep with talent at positions we need help at that I really don’t want to waste a pick. If Landry Jones had not re-signed then I’d understand.