The Pittsburgh Steelers announced yesterday that the new class of inductees for their Hall of Honor will be announced July 27th. Some of the top candidates for induction include Jon Kolb, Dwight White, Troy Polamalu, Hines Ward, Bill Cowher, Myron Cope and Dick LeBeau. In order to be eligible, a candidate must have played or coached or been involved with the Steelers for three seasons or more and should be retired for at least three seasons as well. Perhaps the most important qualification though is “making significant contributions to the organization.” I think Cope has to go in. The originator of the “Terrible Towel” in my book is a shoo-in as is Hines Ward. I would also say Polamalu but I can’t help but wonder if his decision to stay away from the organization since his retirement will hinder his induction. Will the Steelers want a nominee who chooses not to be there? Personally I think you induct him and let the chips fall. If you don’t, then the organization looks petty. Dwight White would be a very popular pick. One of the original members of the Steel Curtain, White was often overshadowed by the others but more than held his own. When the Steelers announced this, the first couple of years were no-brainers, but now the selections become slightly more difficult moving forward.

Make sure you check out our official SCB store. Through July 4th you can save $10 by entering code MERICA10 at checkout! There are some great SCB styles and other original shirts as well.

It doesn’t get enough credit IMO, but this is arguably the best PASS in SB history. The catch is up there too but it has more competition (Tyree, Dwight Clark among others) but the fact that this PASS was placed in the only spot it could have been caught makes it #1 in my book https://t.co/gBQ2ehNLET

Make sure you check out Chris’ 2019 Rookie Forecast!

I see where Jalen Ramsey of the Jaguars is now taking the high road when it comes to trash-talking NFL QBs and WRs. Some think this is in response to his team going 5-11 after a season where they made the AFC Title Game. Or is it that he’s entering the final year of his contract and is looking to get paid? Could be a combination of both.

We are still looking for someone with vast YouTube experience to help us build our platform there. If you’re interested please hit me up at contactscblitz@gmail.com.

With the Hall of Honor on my mind I can’t help but wonder what the next number to be retired will be. The Steelers of course don’t exactly do this often. While they don’t issue some of the ‘great numbers’ (Lambert, Bradshaw, Harris, Webster and Ham although his was issued only once), they’ve only retired two. The number 70 of Ernie Stautner and the number 75 of Mean Joe Greene. If I had to lay odds I would say Franco is next followed closely by Lambert. 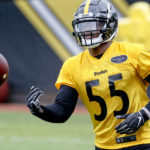