What many of us had thought was coming finally came this morning. All-Pro Center Maurkice Pouncey has announced his retirement from the NFL. He and his brother Mike are both going out together. This was made public by former Steelers’ guard Ramon Foster.

It’s my honor that my brothers from another asked me to announce the next stage in their life. After over a decade @MaurkicePouncey and Mike Pouncey are RETIRING from the @nfl ?. Below are their memos to thank those involved in their careers. #Steeler #chargers #Miami #NFL pic.twitter.com/v9IALOrZaX

While certainly not the time to speculate, I have to in this case. The ball is clearly in the court of Ben Roethlisberger who has often been linked to Pouncey. While it was more often the Center who said once Ben was done so was he, there was always speculation Ben felt the same. He was supposed to have met with the Steelers this week but we haven’t received word if that meeting took place. As for Pouncey, he leaves the Black and Gold with 134 games under his belt, nine Pro Bowl appearances and two All-Pro selections. He was also named to the All-Decade Team for the 2010’s.

There is no question that this immediately changes things for the Steelers and their approach to the 2021 NFL Draft. JC Hassenauer is a fine reserve center but we do not view him as a starter in the NFL. We’ve been wrong before but the drop off between Pouncey and Hassenauer is substantial. The Steelers have to address this before they do the tackle position in my opinion. If you don’t have a solid man in the middle of your O-Line then it really doesn’t matter what talent you have on the edges.

We recorded episode 208 of the Steel City Blitz Steelers Podcast presented by DEK Roofing Inc last night. This was clearly before news of the Pouncey retirement but because we are awesome (LoL) we did in fact discuss his contract and potential options.

I was deeply saddened this morning to see a tweet about a guy I’ve known as long as any on Steelers Twitter and beyond. Dom was a guest many times on our early podcasts dating back to when I had just started out with Steeler Addicts. He has one of the great voices in Pennsylvania and was recently doing basketball for Duquesne Basketball. Please consider helping him out.

Please keep my friend and colleague Dom Errico in your thoughts.

Dom, Duquesne’s PA announcer, is fighting for his life, in intensive care with COVID-19.

If you have the means, Dom, his wife and young children would appreciate your support.https://t.co/EWwzAk8LX7 pic.twitter.com/Nd169p7Jg0 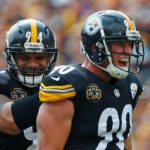