A hearty Thursday hello to you Steelers’ Fans!

Tonight on the Steel City Blitz Podcast Presented by 26shirts.com/Pittsburgh we will finish talking about the Steelers’ Draft. Specifically, we’ll look at where each guy fits in 2017 and what our expectations are. You might be surprised! Tune in at 10pm Eastern on Spreaker.com where you can listen and interact live!

I know a lot of fans were excited this week when T.J. Watt tweeted that his jersey number would be 90 for the coming season. Let me give you some advice. It is not uncommon for rookies to change their number once the final roster is announced. I also believe it’s unwise to purchase the jersey of any player on their first contract. Look no further than Jarvis Jones whose number 95 will be worn by someone else this season.

James Harrison is 39 years old. Let that sink in when you watch him workout or play.

I’ve seen several experts slobbering over the potential of the Cincinnati Bengals’ offense with additions John Ross and Joe Mixon. They of course combine with A.J. Green and Tyler Boyd and on the surface, ya, they look imposing. Until Andy Dalton and the Bengals can prove they can put all the pieces together I remain unimpressed.

Tweet of the Day… AB is watching the NBA Playoffs.

If I was a hooper I would want to play on Lebron James team! All nice passes ????

You may have seen what happened with former Ravens’ tight end Todd Heap. If you didn’t, Heap accidentally backed his truck over his young daughter in his driveway killing her. I hate the Ravens. I hate everything about them. But there is no way I would ever wish that on anyone. Not even a Raven. What a horrible tragedy.

I don’t care that Jabrill Peppers was already off the board when the Steelers chose T.J. Watt at #30. The Steelers WERE NOT TAKING HIM.

Terrific effort by the Penguins last night without their captain. That’s the type of effort you expect from the defending champion.

With Canaan Severin released, the Steelers’ wide receiver corps is now only slightly less cluttered. My gut feeling tells me there will be a couple of surprises as the roster shakes out during the preseason. I’m not ready to make any predictions just yet but stay tuned.

Make sure you check out our sponsor 26shirts.com/Pittsburgh. 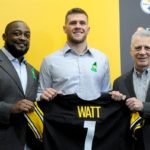