The Steelers announced a short time ago that Matt Feiler would be starting in place of Marcus Gilbert due to a knee injury. This will be Gilbert’s second missed game this season and his 14th missed game dating back to 2016. If you had any questions about why the Steelers drafted Chuks Okorafor (and before him Jerald Hawkins) then there’s your answer. While he might not be ready to start, the Steelers love Okorafor’s athleticism and potential. As for Feiler, he did a very solid job in place of Gilbert back in week three when the Steelers were in a must-win situation against the Buccaneers.

Looks like former Steeler William Gay is retiring. Wish him the best. He’s a guy that made himself into a really solid football player after some early struggles.

I ran a poll this week on Twitter asking fans how they defined success for the Steelers. Here’s the write up along with several tweets that replied to the poll.

#HunterKiller is awesome!. An intense military thriller. I give it 5 stars. Gerard Butler was the MAN!!!  You gotta see this movie. pic.twitter.com/U9ZtsCGTp9

Please make sure you’re following along with Ian as he’s doing some big time work on WPIAL Football as the postseason approaches.

I think there is a very real chance that Le’Veon Bell does not report AT ALL in 2018. I also think the Steelers will slap the transition tag on him in 2019 as well. There’s a decent chance this could end up on court.

If Alejandro Villanueva plays as poorly as he did in week one against the Browns then Ben Roethlisberger should be very, very concerned. Not only did Myles Garrett create pressure but he also beat Villanueva badly on the play where he stripped James Conner. Had that not happened the Steelers would have had an opening game win. What magnifies this issue is that with Matt Feiler starting, it means that Randy Fichtner has to be smart with where he helps on the edge. 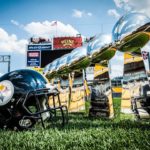 How Do Steelers’ Fans Define Success? Our Poll Results Unveiled

Why in the Hell Can’t the Steelers...