All of the WPIAL football games from Friday night have gone final. Only one playoff spot remains up in the air – the 1A Wild Card between Imani Christian and Laurel. If Imani Christian beats Chartiers-Valley on Saturday afternoon, the Saints will go to the playoffs. Laurel needs a win over Northgate and an Imani loss to make the playoffs. Below are the final scores and game notes, including which teams clinched playoff spots and home playoff games, from Friday night’s action. Don’t forget to check out the WPIAL Standings Page as well.

Seneca Valley 21, Norwin 13
Seneca Valley wins but because they only won by 8 and Mt. Lebanon won by 10, the Raiders will not get a home playoff game.

Canon-McMillan 43, Butler 13
Canon-Mac clinches their first playoff spot since 2008 with a win over Butler.

Woodland Hills 28, Chartiers Valley 14
Woody High came back from a 14-7 halftime deficit to clinch a playoff spot for the 23rd straight season.

West Allegheny 7, Moon 0
After Moon upset West A last year, the Indians got their revenge tonight and clinched a home playoff game.

Armstrong 24, Kiski 21
Armstrong clinches a playoff spot and Kiski wins the Wild Card thanks to Baldwin and Hampton’s losses.

Shaler 62, Fox Chapel 0
Shaler enacted the Mercy Rule at half time to clinch their first playoff berth since 2011. Incredible story for a team that entered this season on a 24-game losing streak.

Mars 30, Hampton 6
Incredibly, all the other games that needed to fall into place for Hampton to make the playoffs happened, but the Talbots couldn’t beat Mars to earn their spot.

Latrobe 39, Highlands 13
Latrobe gets a non-conference win as they head into the playoffs for the first time since 2009.

New Castle 41, Ambridge 0
New Castle clinches a playoff spot with a blowout win over Ambridge. The Red Hurricanes win a 3-way tie with Knoch and Montour.

Derry 35, Burrell 14
Derry wins the Conference Title and will get a home playoff game.

Elizabeth Forward 44, Yough 0
Elizabeth Forward will get a trophy as conference co-champions but will not get a home playoff game because of tiebreakers with North Catholic. Yough RB Dustin Shoaf ran for over 100 yards (surpassing 5000 for his career) and will finish the regular season as the WPIAL’s leading rusher for the second straight year.

Central Valley 14, Aliquippa 8
Quips coach Mike Warfield was an assistant for Central Valley last season and couldn’t find a way to break through against his old team.

Beaver Falls 54, Hopewell 6
With Aliquippa’s loss, Beaver Falls will get to claim a share of the Conference Title as both teams finish at 6-1.

Quaker Valley 34, South Park 14
The defending 3A  state champions enter the playoffs on a high note.

Shady Side Academy 28, Avonworth 10
The Indians clinch the Conference Title with a come-from-behind win over Avonworth

Washington 42, McGuffey 36
The defending WPIAL 2A Champions clinch a home playoff game after a back-and-forth game with McGuffey.

Beth-Center 36, Frazier 0
Beth-Center QB Bailey Lincoski joined the 1000 pass/1000 rush club as he carried the Bulldogs to the playoffs.

Freedom 33, Western Beaver 0
Freedom and Mohawk finished with identical records, which means Freedom will be co-champions of the Midwestern Conference, their first Conference title since 1977.

Burgettstown 39, South Allegheny 6
Burgettstown finishes 9-0 for the first time since 1974.

Ellwood City 34, Brentwood 26
It took 3 overtimes to settle this one.

OLSH 27, Cornell 0
OLSH wraps up an unbeaten season in conference play with a win over Cornell.

Rochester 56, Bishop Canevin 0
Laurel’s chances at the Wild Card got even more difficult as they did not gain any Gardner Points with Cornell and Canevin losing.

Laurel at Northgate
Noon on Saturday

Jeannette 21, Clairton 6
Jeannette beats Clairton for the second consecutive time and clinches the conference title. Clairton will also get a home playoff game.

Leechburg 44, Springdale 21
Leechburg finishes 5-5 for their first non-losing season since 1991.

California 35, Mapletown 0
The Trojans ran out to a big lead on Mapletown and secured their spot in a first place tie atop the Tri-County South.

Monessen 30, Avella 0
Both California and Monessen won by 10+, so the Tri-County South will come down to a coin flip.

Home Playoff Games will be determined by a coin flip at the WPIAL offices at 10:00am on Monday. 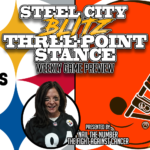