We are entering the 100th season of the National Football League and there will be no shortage of celebrations, all-time lists and rankings of every sort. The Steelers announced their ‘Fantennial’ agenda yesterday. There will be all kinds of fanfare leading up to the home opener week two against the Seattle Seahawks. Current and former Steelers will be attending a local high school game Friday night. Fan fest will be held on Saturday from 2-6 and will feature all kinds of different activities for kids and adults. The Steelers will also be announcing (as voted on by fans) the greatest play in team history. While James Harrison’s INT and Big Ben’s throw to Santonio Holmes in Super Bowl XLIII we’re amazing, if the Immaculate Reception doesn’t win I’d be shocked. Regardless, there’s a lot going on as the Steelers and the NFL celebrate 100 seasons.

You’ll find the tweet of the day below and it’s related to what I’m about to say. Pro Football Focus is a terrific source for information on the NFL and its teams. But PFF has flaws that most casual fans don’t pick up on. For instance, when grading a player, how does the PFF person know what the player’s assignment was? How do they know if there weren’t calls at the line that changed the responsibility? In other words, how do you give a grade on something if you don’t really know what you’re grading? This leads to…

The #Steelers led the NFL in sacks the last two seasons and are rated 19th best pass rush unit in the league by PFF.
And you all wonder why I throw cold water on their rankings. https://t.co/A544VKWwKw

I threw together this piece on Bud Dupree and the Steelers last night. It offers a couple of scenarios about the coming season.

You really need to visit our online store. We have a couple of new designs up and more on the way just in time for Training Camp. You can save $5 on your first order!

A lot of things athletes say these days are taken too seriously and are often taken in the wrong context. Some comments however are too dumb to ignore. Browns’ QB Baker Mayfield offended the entire fan base of the New York Giants by saying none of them showed up to see Odell Beckham, Jr despite him giving them everything he had. Mayfield should probably go back and check just exactly what he’s talking about.

The Steelers first open practice of the 2019 season is one week from today. No I will not calm down! 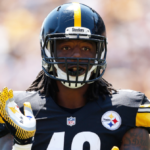 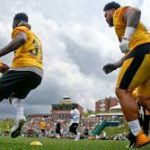 Seven Things to Pay Attention to at Steelers’ Training Camp