Good Monday to you Steelers’ fans!

What an incredibly gutsy win yesterday. The defense was terrific and carried a mistake-prone offense to the finish line in the Steelers’ 17-12 win over the Los Angeles Rams. As I do every morning following a game, here are my thoughts on what took place in Heinz Field.

-The Steelers weren’t exactly playing a bad Rams’ defense. From Aaron Donald to Jalen Ramsey that’s a pretty solid unit. That in mind, the offense had way too many mistakes and could have easily cost the Steelers the win.

-Dropped passes we’re also a significant problem and that weren’t exclusive to any one player. JuJu Smith-Schuster, Vance McDonald and Jaylen Samuels all had drops and you just can’t do that on a routine basis.

-I realize the backfield misses James Conner and a lesser degree Benny Snell, Jr but this running game is really bad. The Rams surrender about 96 yards per game on the ground but the Steelers could only muster 42 on 27 carries. The decision to bench B.J. Finney is absolutely mind-boggling. They slid right tackle Matt Feiler over to left guard and inserted Chuks Okorafor at right tackle. I’m told the decision was made because Maurkice Pouncey is not healthy and because they wanted more “bulk” with which to deal with Aaron Donald. Regardless, the Steelers need to find a back who hits holes and moves forward.

-Mason Rudolph played better than his stats will show. The drops were absolute killers and you could see it weighing on his confidence. He didn’t get a lot of help with the running game and his O-line wasn’t exactly great either. There are many things to work on but his play is not the biggest issue on this offense.

-Randy Fichtner calling drop back passes(with his offense backed up to it’s own goal line) two weeks in a row for Mason Rudolph both resulted in safeties. When people talk about coordinators putting their young QBs in positions to succeed this is exactly what they are talking about. Sure, blocking could be better, etc. but these were both horrific decisions by Fichtner.

-Keith Butler, Teryl Butler and the defensive staff deserve some props. The defense continues to be the difference for this team and if we are going rip Butler, et al then they need kudos when necessary.

-I’m pretty much all out of superlatives for Minkah Fitzpatrick. Four tackles, two passes defended, a fumble return for touchdown and the game-clinching interception. Ya, I think the trade was worth it.

-T.J. Watt has to be in the discussion for Defensive Player of the Year. He leads the NFL in QB hits and added two more sacks and a forced fumble to his resume. He’s now up to 9.5 sacks on the season.

-I think the Rams will regret not running Todd Gurley more often. 12 carries and 72 yards is pretty solid but when push came to shove the Steelers held their own. If Cam Heyward and Tyson Alualu can keep their play going then the loss of Stephon Tuitt doesn’t hurt quite as much.

-Terrell Edmunds was lucky. Very lucky…. To not get called for Pass Interference in the end zone with just over a minute to play. Earlier in the game he did get called for PI in a very similar play where he never even tried to play the ball. For as athletic as he is I continue to be amazed at the low quality of his ball skills.

-The Steelers have to cut down on the penalties. 13 for 107 yards is absolutely unacceptable.

-The officiating yesterday was actually pretty decent despite all the penalties.

-Jalen Ramsey’s statement about JuJu Smith-Schuster not being as good as Antonio Brown is a factual statement. There’s nothing wrong with admitting that as a fan either. JuJu is a terrific young man and a great player but he has struggled without Brown. To deny that is to not be paying attention to what is going on with the offense.

-Tony Brooks-James is an interesting back. Really good speed and quickness but Fichtner has to get him out in space. Like Ryan Switzer he goes down on first contact way too often. Trey Edmunds misses too many holes and if you want to lose the respect of your linemen in a hurry that’s the way to do it.

-Steelers have a very quick turnaround with a road trip (literally as they bus to Cleveland) to play the Browns. Players will get a lot of use out of the team’s new decompression chamber. 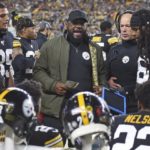 I haven’t been able to blog for health reason but i will admit when i’m wrong. This defense is really playing lights out. I mean even Mark Barron is looking really good. When people were suggesting that the Steelers would win 10 games i thought they needed some serious help. This is a top 3 defense now let’s be patient with Rudy but still let him play. I see 10-6 and anytime you have a D like this anything is possible.