At one point, I wrote a piece detailing that the repeated drug testing of Steelers’ linebacker James Harrison was anything but random. Today, I’ve handed the keyboard over to Ben Anderson who gives his thoughts on the latest news that Deebo has again been tested by the NFL…

James Harrison was tested for performance enhancing substances yesterday for the 3rd time this offseason. James has never failed a drug test and is seemingly “randomly” tested more often than any player in the league. According to the NFL Players Association, a player may be selected at random up to six times per offseason and every player is tested when he reports to his team; at camp or when he reports afterward. You can bet that James will be tested a time or two between now and July 27th.
If you have any interest in the PED testing program: a player may also be tested as a pre-employment requisite (both rookies and veterans). Additionally, every week during the preseason and regular season ten players from each team are tested at random. It ceratinly does seem like James is randomly selected to be tested more often than any other Steeler. With that kind of luck, he should stay away from lottery tickets.
During the postseason, ten players from each team are also randomly tested. This is when you may expect to see Chris Bosworth or Colin Holba or Jordan Berry tested to make it look like it’s completely random.
Players can also be tested for “Reasonable Cause” if they have tested positive within the previous 24 months or “under other circumstances.”
This is where James apparently has landed. He has been given no explanation for his frequent “random” testing, but is seemingly on some kind of “Double Secret Probation.”

Tweet of the Day… The new practice jersey patch

Rivendale Farms is owned by Steelers’ minority owner Thomas Tull who recently sold his Legendary Pictures company. That logo used to grace the Steelers’ practice jerseys. According to a story from the Post-Gazette, the farm raises organic produce and has some of the most valuable cows in the world valued at upwards of $120,000 each. I can tell you this; that better be the best steak I’ve ever had!

I saw another misspelling of ‘Martavis’ in Ed Bouchette’s Chat yesterday. This time it was ‘Martavius.’ It’s really not that hard people.

The idea that the Steelers are “low-balling” Alejandro Villanueva is ludicrous. He’s an Exclusive Rights Free Agent which means the Steelers have all of the leverage and are practicing good business principles. 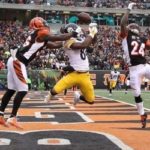