Good Wednesday to you Steelers’ fans!

Pittsburgh Steelers’ Head Coach Mike Tomlin left the door open yesterday regarding running back James Conner and his potential return on Sunday. Conner was dinged up in the closing minutes of the team’s win over Miami and then missed last week’s game against Indianapolis. Conner has an AC joint injury to his shoulder which has varying degrees of severity. Some can result in many weeks of inaction while others may be a week or two. There are two trains of thought of here regarding Conner playing Sunday. First is that this is a non-conference game in which the result will mean little in terms of potential tie-breakers for postseason berths. Therefore, why play Conner with three straight divisional games approaching? The second is if you can play him alongside a healthy Jaylen Samuels then you create some difficult mismatches for the Rams’ defense. One thing I know about Mike Tomlin is that he plays for the game in front of him not ones down the road and quite frankly he knows the Steelers have little room for error. That said, I’m curious to see if Conner makes a comeback this weekend or waits until next Sunday in Cleveland.

Ramon Foster remains in concussion protocol and they’ll take their time with him. The Steelers are now 9-1 when B.J. Finney starts in place of Foster… Roosevelt Nix is having one of those seasons where staying healthy isn’t easy. He’s battling a knee injury… One thing you won’t hear much about in the press is that Mason Rudolph may be dealing with a shoulder injury. Stay tuned on that one.

Bud was named this morning the AFC Defensive Player of the Week! Very deserving honor!

Man, look, I’m 6’2! This pic did me dirty! Makes me look 5’6! 😂😂 Shoutout to Big Al Villanueva, absolute monster on the OL! Fun Fact: Al actually was the person who first taught me how to drive a car when I was a rookie and I could only bike to practice 😅 pic.twitter.com/Zj8yidWGRb

Congratulations to former Western Michigan standout Robert Spillane who was elevated to the active roster. He replaces Ulysees Gilbert who has been placed on IR with back problems. The Steelers also announced that Kevin Rader, tight end, has returned to the practice squad along with wide receiver Terry Wright. Running back Darrin Hall was released from the Practice Squad. I have no doubt that Spillane will become a big hit on special teams. As an inside backer he has limited coverage skills but is a sound tackler and good run stopper.

Several weeks ago the Steelers went to LA and beat the Chargers in front of a crowd that was easily 80% Black and Gold. This past weekend, the Packers went to LA and lost but the stadium was again filled with visiting fans. This, among many other things has led to speculation that the Chargers may in fact be headed to London. Owner Dean Spanos yesterday denied this quite emphatically but there are things that cannot be denied here. The NFL could lose A TON of money in LA when the new billion dollar stadium (home to both the Rams and Bolts) opens and has very little in the way of season ticket and PSL purchases. Chargers’ fans are still struggling with the move to LA from San Diego and many refuse to make the trip. London meanwhile has proven it is ready for a franchise. I still think it may ultimately be the Jaguars but the Chargers suddenly make some sense. I’d also like to see some realignment in the NFL if this happens. 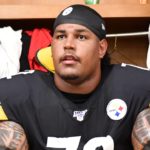