If you asked me who I thought would make the risky move of signing running back Kareem Hunt the Cleveland Browns wouldn’t have been at the top of my list. I say this because Nick Chubb more than proved he could be a number one back in the NFL. So why did the Browns sign Hunt? First off, Adam Schefter is reporting that Hunt could be suspended for over half of the season so perhaps the Browns are thinking he could be fresh for the late season push. He could also be used as trade bait. If the blowback from signing a man who clearly has some temper issues (against women no less) isn’t that bad then more teams will be interested. What I know for certain is that there was no way the Steelers were going to sign him. Do you really think an already volatile locker room would suddenly stabilize with Hunt in it? Forget it.

I honestly don’t know what to think of in regards to Kyler Murray. He’s obviously an exceptional athlete and talented quarterback but I think you’d have to have a very specialized offense for him due to his size. I would also be concerned about baseball. He now claims he’s all in on football but does that change if things don’t go so well initially?

Tweet of the Day… And the bad looks just keep on coming.

Yesterday marked 18 years to the day that Three Rivers Stadium was demolished and it certainly brought out a lot of emotions. It was not only a sacred place for the Steelers but the Pirates as well. I was fortunate enough to be at the final game in 2000 when the Steelers beat the Redskins. Hank Poteat had a punt return for touchdown, Richard Huntley rushed for two short scores and Jason Gildon recorded 1.5 sacks of Washington QB Jeff George. How’s that for some name dropping?

Still time to get your son or daughter signed up for the Ben Roethlisberger Youth Football Camp! Great opportunity for your kids and definitely memories that will last a lifetime.

It’s really interesting to see the wide range of thoughts regarding Antonio Brown’s trade value. NBC’s Patriot King believes it has dropped so far that the Steelers would be better off hanging on to him. ESPN’s ‘free agent tracker’ suggested he could go to San Francisco or Oakland for a top five pick. I still think Brown is gone either way which leads me to today’s “AB Trade Scale.” 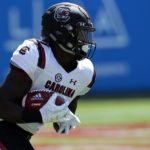