If the news from Gerry Dulac of the Pittsburgh Post-Gazette is accurate (and it typically is) then the Pittsburgh Steelers will be in the very serious market for a center. Dulac tweeted last night that Maurkice Pouncey was leaning towards retirement. If he does in fact leave that leaves JC Hassenauer as the center. It’s possible they stick with him as a bridge until 2022 but one has to believe that center is now a major priority for the team. The question is whether or not it immediately would trump finding a left (or right) tackle in the draft. Availability will certainly be the biggest key but if I have my choice I’m starting at center. You have to build your O-Line inside out. Whether the Steelers do that we shall see.

I felt compelled to put together some thoughts on JuJu Smith-Schuster, his social media presence and his future in Pittsburgh. Some will agree and some won’t. But that’s why I do this.

Tweet of the Day… This isn’t meant to be disparaging. It is what it is.

Aaron Rodgers had one outstanding postseason, in 2010, when the Packers didn't have a bye and won four games, culminating in Rodgers winning the Super Bowl MVP. The rest of his career, his postseason resume is not that great.

So About the OC…

We thought this was all done and that Matt Canada was going to be the new Offensive Coordinator of the team. Then, interviews were held with both Hue Jackson and Pep Hamilton and now we seem to be back to square one. Interviewing one of those gentlemen satisfied the newly extended Rooney Rule so needless to say there is intrigue afoot. Is is possible that Mike Tomlin is waiting to find his Offensive Line Coach before he goes any further? Or perhaps he has his eye on someone that has been on one of these final four teams? My gut feeling is that we’ll start to get answers this week. And don’t forget, the coach of the defensive backs is still wide open too.

It brings me zero satisfaction to admit it but Tom Brady, who didn’t even play all that well Sunday, is the best greatest of all time. You don’t go to ten Super Bowls, win six of them with a potential seventh pending, and not be considered the best at your position. I think there are other QBs who were far more skilled and were just better players but for whatever reason they couldn’t come close to what Brady has accomplished. I’m just glad this trip to the Super Bowl isn’t with the Patriots. 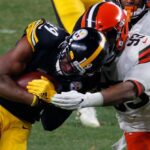 SCB Steelers Quick Hitters: The “Off the Top Rope” Edition

Could Mitchell Trubisky Be a Big Success...