I had a feeling the Pittsburgh Steelers would be able to score last night but I never saw that coming. The 52-21 rout over the Panthers clearly left Carolina ‘blue’ and the rest of us beaming with Black and Gold.

Normally when I go to bed following a Steelers’ primetime game it takes me awhile to fall asleep win or lose. Last night I couldn’t sleep because I couldn’t get the grin off my face!

In all seriousness, Mike Tomlin hit the nail on the head after this game. He was very proud of the effort but also acknowledged his team isn’t “this good.” He’s absolutely right. Last night was a perfect storm of everything going right for the Steelers and little going right for the Panthers. It was an amazing win but it means nothing nine days from now when they take the field in Jacksonville.

Tweet of the Day… How can’t you love this?

Pouncey said Roethlisberger offered to pay for any fines the linemen might get for the scrum that ensued after the Reid hit.

Not much more to be said for the performance of Ben Roethlisberger. It may have been one of his finest performances not just in terms of the numbers but in terms of his total control over what was going on pre-snap and during the play. I didn’t see him look confused one time by the Carolina defense. Just a brilliant game by our quarterback.

James Conner was in concussion protocol last night but he should have enough time to be ready for the next game. I believe the hit may have been on his touchdown run. He was struck firmly in the side of the head by a Panthers’ defender. Either way I think the fact that both Jaylen Samuels and Stevan Ridley got so much playing time is a real positive.

David DeCastro coming in to defend his QB after that hit by Eric Reid was my favorite play of the night. It’s clear these guys love playing for Big Ben. As for the hit, it deserved the penalty and based on recent rule changes the ejection was warranted too. Reid lead with his head down, and his shoulder and forearm leading the way on a bee-line for Roethlisberger’s head. If that had been Sean Davis or Terrell Edmunds I would feel the same way.

Hard to find any negatives about last night but there were some. Credit Carolina OC Norv Turner for finding ways to get Christian McCaffrey isolated on Vince Williams and Jon Bostic. These guys had no chance, none, to keep up with the speedy back. Keith Butler has to be able to adjust faster in those situations.

Part of the reason he didn’t need to adjust so much was the pressure his defense was bringing. Whether from the edge or from the interior, Cam Newton had guys in his face much of the night. That type of intensity is needed if this team is going to playoffs and beyond.

I guarantee that Newton did not realize how fast T.J. Watt was. On Vince Williams’ pick-six, Watt came untouched into the end zone and got hold of Newton almost resulting in a safety. The way Newton reacted when he realized Watt was on him told me he didn’t think he’d get there as quickly.

Chris Boswell was perfect last night on his PATs and a 50 yard field goal.

You know who is quietly starting to play better and better? Javon Hargrave. He’s not the guy getting tons of QB pressures but quite often when a running back seems to have a hole Hargrave slices through and makes the hit. He might not always get credit for the tackle but he alters the running back’s path to where his teammates can converge.

I don’t expect any fine or suspension of Antonio Brown in light of his speeding ticket. Lesson learned. It happens to all of us.

Credit Keith Butler and his staff for recognizing the weakness in Christian McCaffrey’s game. He just can’t hold up in pass protection against blitzing inside backers. That was clearly a big part of the pressure on Newton.

Vance McDonald is a freaking beast. Does he ever go down on the first hit? Not very often.

I continue to believe that Big Ben is a better quarterback when he isn’t forcing the ball to Antonio Brown. Five different guys scored last night on his passes and at one point eight different receivers had receptions. 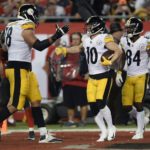