Good Friday to you Steelers’ Fans! There’s a lot to get to so let’s go!

Let me start with the Martavis Bryant trade. As I have written here many times, the Steelers were not actively trying to trade Bryant but they knew the following:

The magic number has been “three.” Many teams were offering a fourth round pick which is the round the Steelers selected Bryant in and that just wasn’t going to do. As soon as someone was desperate enough to offer a third rounder? Bingo. Remember, Bryant is one failed test away from missing a season again and he’s been known to be more difficult to coach than reported. This trade was the RIGHT move. They got a selection in the top 80 of THIS YEAR’S Draft and can sign a rookie who would be on  a four-year deal.

If you watched Bryant closely last year then you know he wasn’t the same player he was in 2015. He had no lateral movement and his elusiveness was gone. Only his straight-line speed remained. Again, this was the RIGHT move.

Remember last year during the Draft when the Steelers took JuJu, Martavis Bryant got into a Twotter spat with Sammie Coates about who JuJu was replacing.

As for the selection of Safety Terrell Edmunds… This is a reach. There’s no denying it because he more than likely would have been there in the second round. But let’s examine why the Steelers chose him. First of all, he comes from an excellent football pedigree. Secondly, he’s a great tackler and that’s something the secondary sorely needed. Third and perhaps most important for the Steelers, he tested off the charts athletically. His Relative Athletic Score (RAS) was in the top ten out of nearly 650 players.

The Steelers followed a very similar paradigm to other selections. They went with smarts and athletic ability over “what the tape showed.” If Tom Bradley can coach this kid up then this can become an excellent pick. If he isn’t on the field on defense though in 2018 it will become very difficult not to call it a bust. You have to get players in round one that contribute right away.

We recorded the Steel City Blitz Podcast presented by 26shirts.com/Pittsburgh last night while the Draft was going on. Ben and Cnic joined me to break down the Steelers’ selection of Terrell Edmunds but clearly, Ryan Shazier stole the moment.

I’m truly blessed and humbled from all the prayers, love, and support that I have received . This is what keeps me going. Just continue to #Shalieve pic.twitter.com/p1kAZfG8xT

With one pick in the second round and two in the third, I fully expect inside linebacker and wide receiver to come off the board tonight for the Steelers. I would love to see Christian Kirk and Darius Leonard be those picks but either the Steelers have to address those positions immediately.

If we learned anything from seeing Ryan Shazier’s amazing moment last night it’s the reality that he still has a long way to go. I continue to stress to all of his fans and fans of the Steelers in general that our number one hope for Ryan is that he can have great quality of life. We would all love to see him play football again but what should be more important than that and anything else is his health going forward. Kudos to Shazier, his fiance and the NFL for that moment.

On to Day 2 of the Draft Steeler Nation! 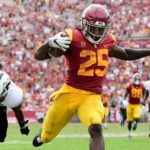