I think many of you realize that the Rooney Family is the majority owner of the Steelers. What you may not know is that there are numerous minority owners. David Tepper, the new owner of the Carolina Panthers was one as was Jimmy Haslem, owner of the Browns. One of the Steelers’ minority owners is a guy named Thomas Tull of Legendary Pictures. They were responsible for the Batman trilogy with Christian Bale and the movie about Apple’s Steve Jobs. Yesterday Mr. Tull had a guest with him at Family Fest in Heinz Field by the name of Chadwick Boseman who you may know better as “Black Panther.” It is always funny to me how these players, who are often seen as idols by fans, turn into those very same fans when famous people from other walks of life are around. It’s a cool piece of perspective for all of us. 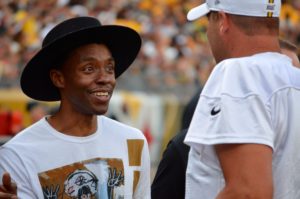 Our WPIAL Coverage is Underway!

Ian has been prepping for several weeks now and has released his first piece on WPIAL Football. Our coverage is getting additional content from Brentaro who will be doing some cool features on local teams and players as well.

T.J. Watt was removed from the PUP list yesterday afternoon and practiced with the team last night. As we had been told, his hamstring strain was not overly serious. The sensitivity of hamstring injuries is different for everyone so I’m hopeful he’s 100% and ready for a long season.

ESPN’s Jeremy Fowler is reporting that the Steelers are indeed working on an extension (reportedly two years) for cornerback Joe Haden. This was suspected when Training Camp opened. Haden is 30 years old and has performed well for the Steelers since coming over from the Browns. This one is going to be interesting in terms of the money and length of the contract of it is indeed just the two years. The Steelers don’t want to give too much to a cornerback on the downside of his career. On the other hand, he’s been easily the team’s best corner so keeping him around is vital.

Great article here from the Trib’s Chris Adamski on Undrafted Free Agent Rookie Fred Johnson. At 6’7″ this is a big man playing guard. He’s had some really good moments in Camp so far too.

Make sure you get one of our brand new ‘2019 Schedule” t-shirts from our online store. Every shirt is $25 but if you’re ordering for the first time you can save $5.

The Steelers will enjoy a day off today before returning to practice tomorrow at St.Vincent College. 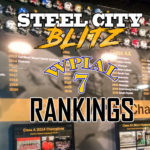 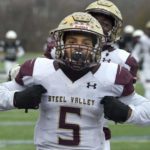 Who will be the WPIAL’s leading rusher in 2019?