Home WPIAL Who will be the WPIAL’s leading rusher in 2019?
WPIAL

Who will be the WPIAL’s leading rusher in 2019? 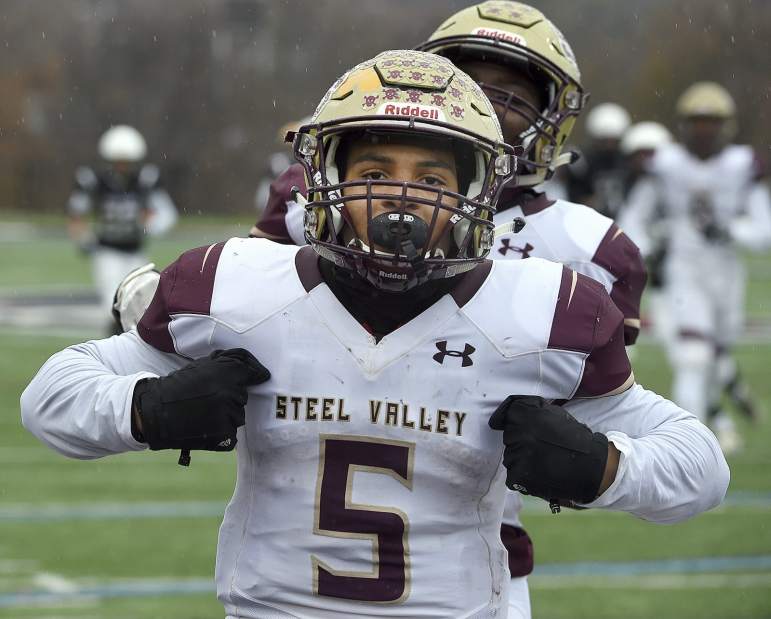 There were a lot of good running backs in the WPIAL last year that were part of the Class of 2019. Kam Williams, former running back at Steel Valley, was the WPIAL leading rusher with 2,020 yards on the season. Williams and Duquesne-commit Todd Hill (who finished 8th in the WPIAL with 1754 yards) helped Steel Valley win a WPIAL 2A football championship. It was Steel Valley’s big playoff run that propelled Williams to the rushing crown.  Interestingly, the Top 13 leading rushers were all seniors.

Yough’s Dustin Shoaf won the regular season rushing title with 1968 yards but the Cougars did not make the playoffs and Shoaf was surpassed by three players. Interestingly, Williams did not even claim the regular season rushing crown in 2A, which was won by Mohawk’s Braydon Cameron with 1473 yards. Shoaf will attend Mercyhurst University this fall.

Noah Whiteleather made big plays for Rochester last season, leading the Rams to the Class 1A Championship Game. Even though Rochester came up short against conference rival OLSH in the WPIAL final, Whiteleather finished second in the WPIAL in rushing yards with 2,002. He will play college football at Edinboro University this fall.

Whiteleather and Kam Williams were the only two running backs in the WPIAL last season that surpassed 2,000 yards. That’s impressive!

With Williams now done with high school, there will be a new leading rusher in the WPIAL in 2019. The fact that Top 13 players in rushing yards all came from the Class of 2019 shows how special the seniors were last season.

Pine-Richland running back Luke Meckler has already won 2 WPIAL championships and 1 PIAA championship in his high school career. Meckler also has a chance to be the leading rusher in the WPIAL this season. Last year as a junior, Meckler ranked 16th in the WPIAL with 1,492 rushing yards. He was also ranked 2nd in the Class of 2020 in rushing yards last season. Meckler has scholarship offers from Kent State and Dartmouth and is drawing attention from other MAC schools.

Penn-Trafford’s starting running back, Caleb Lisbon, has not had a lot of recognition from the media; but, I think that will change in the fall. He has an FBS offer from the US Naval Academy and FCS offers from Fordham, Albany, and Delaware. Lisbon was ranked third in the Class of 2020 last season with 1,329 yards. Lisbon hopes he can get Penn-Trafford to the WPIAL 5A championship game in 2019 after the Warriors fell to Peters Twp in the quarterfinals.  He was the second-leading rusher on the team when Penn-Trafford reached the WPIAL final in 2017. That year, they lost to conference rival Gateway by a score of 21-16.

Don’t worry, I did not forget about Gateway running back, Derrick Davis. Derrick could be the WPIAL’s leading rusher in 2019 as well. Davis burst onto the scene as a freshman during the 2017 playoffs in which he led Gateway to their first WPIAL title since 1986. He rushed for 1,205 yards last season and was only a sophomore. We can still watch Derrick play good football for the Gators for two more years. Davis led all underclassmen in rushing yards in the WPIAL last season. Derrick Davis is the best junior in the State of Pennsylvania and has offers from nearly every major school east of the Mississippi including Pitt, Penn State, Ohio State, Michigan, Notre Dame, Clemson, and Alabama.

Now, one might think that it is not important who leads the WPIAL in rushing yards next season. However, what some might not realize is that it can mean a player’s world to lead the WPIAL in a statistical category. Kam Williams leveraged the WPIAL rushing title into an appearance in the NFBD All-Star Game and a scholarship offer from Lake Erie College.

Saying that you lead the WPIAL in rushing yards is something that impresses college football teams.