I have to admit that when Mike Tomlin said he was “angry but glad” that his Pittsburgh Steelers loss on Monday evening I was a bit taken aback. I’m not exactly thrilled to hear the head coach of my Steelers say something like this but then I took a moment to consider it deeper. I don’t believe that Tomlin is pleased by losing one bit as he’s usually more interested in the ‘how’ anyway. But I get the distinct feeling that he felt his team was feeling the pressure of being the only unbeaten team in the league. Perhaps this anxiety is what led to the dropped passes, dumb penalties and overall bad play on the offense? I really can’t say but I know that Mike Tomlin has a much better feel for his team than I do and I get the sense they needed to taste failure. There’s a long held belief about some great boxers that they really don’t start boxing to their ability until someone bloodies their lip. Maybe that’s what he’s getting at here. Me personally? I don’t know that I buy it 100%. I struggle to see how winning games is a problem or an issue. That is why we play games right? To win… Because of all of the injuries I don’t know that we’ll be able to truly test Tomlin’s theory. Buffalo is a very good team and I expect it to be every bit the battle it was last year in Pittsburgh. If guys aren’t dropping balls and making the mistakes we’ve seen in recent weeks then maybe Tomlin will have had a point.

Tweet of the Day… You’re absolutely right DJ. Giving in isn’t an option. Getting better is.

Through the good and the bad… gotta keep ur chin up ??

No sooner has the first loss in 12 games started to sink in and already we have local beat writer Chris Mueller blaming the loss and offensive misgivings on Ben Roethlisberger. I like Chris, I think he has always done a solid job, but he’s off base here. The Steelers cannot run the ball. Period. You don’t run the ball just to be able to say you ran it a certain number of times if you aren’t gaining anything. Roethlisberger is throwing more than I would like to see too but there’s little choice right now and I’m surprised Mueller isn’t recognizing this.

I mentioned this yesterday when re-capping the game in this space and it bears repeating after watching the game film. The Steelers had seven attempts to get the ball across the goal line Monday night and failed. One of those attempts was to throw to a ‘tackle eligible’ by the name of Jerald Hawkins. He had just come off of the Covid/IR list and didn’t have any experience that I’m aware of in terms of catching the ball. My displeasure with that play call aside, the fact that the Steelers couldn’t score from one yard out does speak to the ability of the WFT’s front line, but it speaks more to the lack of desire on our part. Getting a yard in the NFL is all about one on one matchups. Me vs you. Who wants it more? It really is that simple. On the ill-fated fourth down play you see two great examples of this as both Vance McDonald and Eric Ebron were badly beaten by their men. If Mike Tomlin and his staff want to drive any point home this week then there’s the hammer. 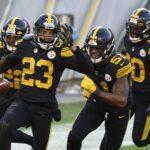 A couple items , first the hot mess before the half yes Smith ran away with the game ball and it should have been a five yard penalty with a ten second run off. But as a coach you use the game situation and late substitute the ref has to holds the snap for you as the clock runs out. Ben does have two glaring weaknesses on the goal line. First he’s not a good QB sneak guy and second he takes a long time on hand offs. It’s great that we are 11-1 and just like every other team we have weak areas. The two that are cause for concern are the play of the offensive line and Ben’s down field accuracy. i’m going to bet we come out and play very well against the bills in a game that’s appears to be anyone’s to win.

You’re right about him as a QB sneak guy. He’s never been really good at it. With Williams now on Covid list and out for Sunday, our defense is suddenly a real mess. Haden hasn’t practiced yet this week either.