Good Thursday to you fine Steelers’ Fans out there!

If you’re a regular visitor to the site then you know yesterday was not our best day. We had two separate crashes related to a bad plugin. We eventually got things resolved by 7pm ET last night but this situation explains today’s title if you hadn’t figured that out already. I accept technology and embrace it as much as I can but there are days, like yesterday, where technology sucks. Much like the NFL Season, there really is no ‘offseason’ for talking about the Steelers either. Being down even ten minutes is a real pain in the buttocks.

Speaking of pains in the rear, I’ll be joined by Cnic and Ben tonight on the SCB podcast sponsored by BodyTech Gym. We will cover Le’Veon Bell’s franchise tag and what the future may hold…. Antonio Brown’s contract and why you need to know this doesn’t guarantee anything past the next couple of seasons… We’ll have plenty of NFL Draft talk and probably a rant from me on Danny Smith keeping his job. (Beats a dead horse)

The Steelers and Lawrence Timmons are apparently talking about a new deal for the veteran linebacker again. I still say the number to look for is around $5 million per season for 2-3 years. I’ll be stunned if the Steelers go any higher than that. Oh, and this notion that Timmons is an every down linebacker? No. He isn’t. Not anymore.

Harrison: "I want to prove anybody wrong that doubts me." pic.twitter.com/r8vImhGOlm

I’ve seen some speculation that the Steelers will look to add a “big back” to compliment Le’Veon Bell in the Draft. Not sure why… Wouldn’t the idea be to find a guy with some speed who can change the pace up a bit?

Ben wrote this timely and excellent piece. I’ll let you decide but I know I agree with it.

As noted above, the team did in fact bring James Harrison back on a two-year deal worth $3.5 million. I’ll admit, I’m a little surprised by that amount. Did he deserve higher than the vet minimum? Yes, but I didn’t see it going to high. Either way, good to have him back. 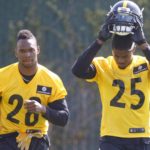