Yesterday I wrote an article titled “Is Antonio Brown Becoming a Distraction?” Not surprisingly, I received a large number of negative responses and of course some that I won’t even print in this space for the sake of proper decorum. Just as I am entitled to my opinion, readers are more than welcome to share their’s. But that’s largely the problem. Many of the people who went after me and my lack of intelligence didn’t even read the article. They based their entire opinion on the title but should this surprise any of us in the “gotta have it now” generation? The other thing I’ll say is that I don’t write articles unless there’s merit to them. People think because I’m just a blogger that I don’t talk with anyone or have sources. Well, that couldn’t be further from the truth but anyway… Please continue to read, agree and/or disagree with me as often as you’d like. Just read the article first huh?

Mike Tomlin has been ripped on for years for his cliche-filled press conferences that often provide very little information. With every passing presser I’ve come to see why he does what he does. Half of the questions he gets are so asinine or unimportant it’s laughable. Trust me. If you listen to his presser each week you know what I mean.

As for the press conference itself, Tomlin named just two guys that are out for the game in Miami. Both Shamarko Thomas (groin) and Cam Heyward (hamstring) will not be available. Tomlin was not willing to put a time frame on either injury, especially Heyward’s. DeAngelo Williams’ name came up too as he has a banged up knee but Tomlin stated he would be available on Sunday. He also shot down the idea of Ryan Shazier moving to safety to lessen the chances of injury. This speculation comes up all the time…

Tweet of the Day… Always good to hear the stories from Lynn Swann.

This Weds at 8pm, I sit down with @Buck on #UndeniableShow season finale to talk football and life. Catch it on @AudienceSports.

I hate to look too far ahead but it’s difficult not to in this case…. The Steelers could be in a position where they have to re-do the contract of Antonio Brown and re-sign Le’Veon Bell in the same offseason. Bell is the much bigger question mark due to suspensions and injuries but if he stays healthy and out of trouble it’s going to be very intriguing. 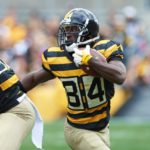 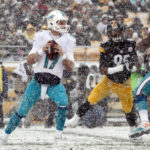