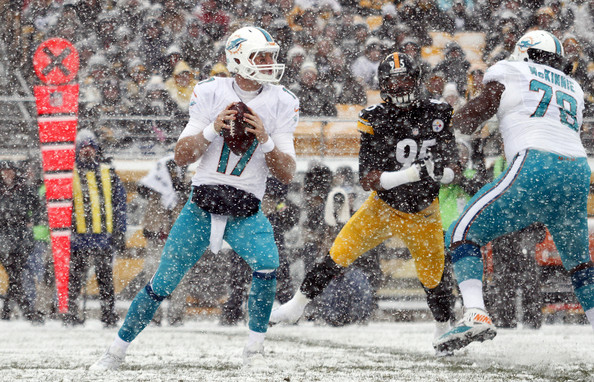 The Pittsburgh Steelers finally leave the friendly confines of Heinz Field after two straight home games and south to Miami. No, things are not going well for the Dolphins but don’t let that fool you into thinking this game will be a piece of cake for the black and gold. Miami has talent on both sides of the ball and they cannot be overlooked. Today I’m jumping under the headset of Keith Butler to see what the Steelers need to do in order to shut down the Dolphins’ offense.

Miami quarterback Ryan Tannehill is a respectable 12th in yards passing this season. That puts him ahead of guys like Alex Smith and Russell Wilson. The bad news for Tannehill is that he ranks 29th in total Quarterback Ranking at just 39.4. For perspective, Ben Roethlisberger is third with a QBR of 82.5.

To this point, he’s thrown six touchdown passes and seven interceptions. He’s also fumbled four times as well. Tannehill wasn’t the reason the Dolphins lost at home to Tennessee on Sunday because he actually played better than he had recently. But questions still surround his future despite Head Coach Adam Gase saying he will not pull the plug on Tannehill anytime soon.

The Dolphins’ receiving corps of Jarvis Landry, DeVante Parker and Kenny Stills is very athletic but is dominated by Landry who has more catches (34) than Parker and Stills combined (23). The running attack has been stymied by injuries to Arian Foster (no real shocker right?) and overall lack of production by Jay Ajayi and Kenyon Drake.

The real Achilles’ Heel of the Dolphins’ offense has been their line play. They’ve surrendered 11 sacks in the last two weeks and released two former third round picks this week.

How Do the Steelers Attack?

With no Cam Heyward this week, keeping an eye on the rotation of the defensive linemen would behoove us. This logically means more snaps for both Javon Hargrave and Ricardo Mathews but could also force Butler to use more four man fronts that consist of two down linemen and two linebackers.

I don’t think there is a difficult formula for success here. The Steelers’ D must keep the Dolphins from getting any momentum whatsoever in the running game. Do that, and all of the pressure falls on Tannehill. With a rebuilt offensive line the Steelers’ should thrive and get pressure on Tannehill.

On the back end, I expect to see things stay pretty much the same. Miami’s receiver fast and cannot be allowed to get deep. Look for the Steelers’ corners to give plenty of space and tackle the receiver on the catch which is nothing new. The difference however could be because of the O-line problems. If the Steelers are getting early pressure then I would expect the corners to cheat up a little in anticipation of some quicker than expected throws.

If the Steelers can limit the run game and make Tannehill uncomfortable then that will go a long way towards victory.