The Steelers had a busy and efficient day on Monday signing two players to free agent contracts. Running back Knile Davis signed a one-year deal while cornerback Coty Sensabaugh is inked for two years. These are very typical signings by the Steelers. They provide depth and a start if necessary but I don’t see either guy being a difference-maker in 2017. Regardless, at least fans will be content knowing the Steelers haven’t totally been asleep at the wheel in free agency. Now we’re cookin’ right???

Here are my more ‘laid out’ thoughts on these two.

Dale Lolley of the Observer-Reporter and Steelers Nation Radio reported that Ben Roethlisberger is “leaning towards returning.” I’m stunned…

I know I’m certainly glad that that the FBI, in conjunction with Houston Police, have been able to find Tom Brady’s missing Super Bowl jersey. Tax dollars at work right there folks! My bigger question is how does the NFL, with literally billions spent on security, allow this Mexican reporter to walk in and out with jerseys (and reportedly Von Miller’s helmet from SB50) without being spotted?

Tweet of the Day… DeAngelo Williams was asked via Twitter if Knile Davis’ signing means the end for him in Pittsburgh.

Not sure but it does mean they got a dynamic player I remember him showing up on our scouting report https://t.co/lRJB2QEg0Y

Great time chatting with folks on the @SCBlitz handle last night. My goal is to inform and give my opinion but I also use this forum to learn as well. One thing I’ve been increasingly considering is that the Steelers may double up on OLB/EDGE guys in this draft. I learned I’m not the only one.

I am just not on board with T.J. Watt at 30. The lack of explosiveness is a huge concern for me. Love the motor and his overall game but you have to be able to get to the QB in the NFL and I don’t see him doing that quickly enough.

Have a couple of new features coming on the SCB Podcast this Thursday night. Let’s just say they involve rants and sound effects. 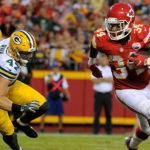 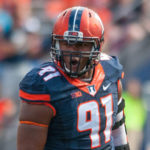